If our simian friend is any indication, then I think we know exactly who's taken up residence in our castle. The Wicked Witch.

"Witch Hunt" is the thirteenth episode of Season Three of ABC's Once Upon a Time. It was written by Jane Espenson and directed by Guy Ferland. It is the fifty-seventh episode of the series overall, and premiered on March 16, 2014.

Emma arrives in Storybrooke with Henry and reunites with her friends and family, only to discover that no one remembers how they were transported back – or the past year they spent back in Fairy Tale Land. But Emma is sure that someone in town is responsible for this new curse and teams up with Regina in an attempt to uncover their identity. While they were in Fairy Tale Land the past year, Regina, with the aid of Robin Hood, attempts to break into her castle, which has been overtaken by the Wicked Witch.[2]

In the Enchanted Forest a year ago, the Wicked Witch of the West admires the various luxuries and treasures in the Evil Queen's palace. She remarks what a shame it is that all these beautiful things were wasted on Regina. She puts on one of the Queen's dresses and then sends out one of her Flying Monkeys to find Regina and "let her know that I'm here."

Outside the castle, Snow White, Prince Charming, and company continue on their journey to Sherwood Forest. Red Riding Hood approaches Snow; reminiscing about "old times" when they were on the run from Regina. She comments on how unusual it feels to now be running with her. Snow tells her she has to believe Regina has changed for the better. Red tells her friend she hopes so, but also notes that Regina does not seem well. Snow approaches Regina and notices Regina is thinking about Henry. Regina replies she is always thinking about Henry, but her mind was also on the palace. She explains to Snow and Charming that there is a system of tunnels that run underneath the castle and possibly beneath the protection spell encircling the edifice. She explains she intends to use the tunnels to get herself inside to lower the shield, allowing them to send in their army and drive out the unknown person who has taken up residence in the castle. Moments later, the flying monkey sent by the Wicked Witch attacks. It swoops in the direction of Neal, but he manages to duck just in time. The creature then flies in the direction of Robin Hood's young son, Roland, presently standing a few feet in front of the Queen. She stops the monster by turning it into a stuffed animal, which she gifts to the child.

A year later in Storybrooke, David, Emma, Hook, and Mary Margaret are gathered in the inn. Emma asks her parents what has happened. They reply they have no idea either; they recall watching her drive over the town line with Henry, Regina beginning to cast her spell to stop Pan's curse, and then blacking out. The next thing they can remember is waking up as if it were any other morning in Storybrooke. Their only clue that time has passed is the fact that Mary Margaret is nine months pregnant. Hook recalls that Regina's spell did return them to the Enchanted Forest, and they spent a brief period of time with Prince Phillip and Princess Aurora. He recalls that he left the group shortly afterward as they were preparing to make their way to Regina's old palace. David asks him how he knew to find Emma if he left before the curse, to which he explains that a bird came, which he figured they must have sent. Tied to its leg was a small vial of memory potion, and a note telling him of the second curse and directing him to retrieve Emma. Shortly after, Leroy and Happy enter, telling the present company that three dwarves have disappeared. Mary Margaret explains that people have begun disappearing since they woke up. With all the confusion, they still do not know who is missing, but Emma briefly worries Neal may have. Hook assures her he will turn up sooner or later, as "he always does". Emma realizes there's only one way to figure this out: they need to get their memories back and figure out who took them to begin with.

Back in the Enchanted Forest, the group discusses the attack. Snow identifies it as the same beast that attacked her and Regina on their way there. Grumpy states that it strongly resembled a monkey, and Belle shares knowledge of it being a flying monkey native to the land of Oz. From this, Regina figures the Wicked Witch must be the one who has overtaken the castle. Charming asks Regina what the Wicked Witch has against her. She replies she has no idea, as she has never met the witch. He then announces to the group that they will stick to their plan: Regina will get the shield down, and they will arm up and attack. Snow wishes to accompany Regina, but she insists this is a one-woman job.

In Storybrooke at Granny's Diner, Ruby serves Henry a hot cocoa with cinnamon. When he asks her how she knew, Ruby creates a flimsy excuse that is was a lucky guess. David and Mary Margaret enter, and Emma introduces them to Henry as old friends of hers. When Henry questions how they know each other, Mary Margaret makes the mistake of saying they met in Phoenix. This confuses Henry, because he thought Emma was only in Phoenix for the time she spent in jail. Mary Margaret invents a story that she was Emma's cell mate. Across the diner, Regina spots Henry and the shock of seeing him causes her to drop her food. He stares back blankly, then shrugs it off. Emma walks up to Regina, and explains that Hook found her and gave her a potion to jog her memory, but there was not enough for Henry. Regina then states she did not cast the new curse. Emma admits the thought did cross her mind, thinking it may have been her way of bringing Henry back. Regina claims if so, it would not add up, since Henry would have no memory of her. Emma understands, but she needs to start ruling people out.

Near the town line, Robin Hood and the Merry Men are admiring a crossbow Little John has recently acquired. He attempts to use it to shoot a turkey, but misses. Determined to hit it, Little John chases the turkey and comes very close to the town border, where a flying monkey snatches him away. Later, David, Hook, and Emma arrive on the scene. Emma figures Little John was abducted for attempting to cross the town line. When asked by David, Robin states he did not get a good look at what took John, but describes some kind of monster with wings. Emma compares this description to the monster she fought in New York. She then asks David and Hook to run a search grid to find the missing man. When inquired about why she isn't joining, Emma explains that Regina is right and she cannot go around asking people about the new curse one by one; instead, she intends to talk to everyone.

At the town hall, Emma tries to keep various citizens, among them Archie, Belle, Dr. Whale, Granny, and Leroy calm. She explains that there is reason to believe people are being taken when they approach the border, and she is trying to figure out who cast the second curse. At this, Leroy scoffs, believing there to be no need. He makes it clear that there is only one person who both knows how to use the curse and has ever done anything like this before: the Evil Queen. At this, all eyes in the room turn to Regina. She attempts to defend herself, but they refuse to believe her. She declares that if she was behind this, there was one thing she would have right now: Henry. Emma states Regina is not going anywhere near him until she figures this out. This further upsets Regina, as she and Emma already went through this, and insists she is innocent, to which Emma states she is now wondering if that is true. At that, an angry Regina magically causes an earthquake in the hall and disappears in a cloud of violet smoke. Dr. Whale tells Emma not to let her get away, to which Emma states she won't. When Emma exits, a woman donning a green necklace smiles to herself.

In the Enchanted Forest, Regina continues her journey to her castle. She uses her magic to remove a large boulder in her path, but as she turns around to place it down, she finds Robin Hood standing behind her. She attempts to convince him to head back to the others, but he insists he must at least try to help her. He tells her that the flying monkey from earlier was not after Roland, but her. Roland was merely standing in its way, but it still could have seriously hurt his son. Reluctantly, she lets him join her, and warns him not to get in her way. He remarks that he "wouldn't dream of it."

In Storybrooke, Emma enters the mayor's office, where Regina is waiting for her. The two then proceed to figure out who really cast the curse.

This scene is included on Once Upon a Time: The Complete Third Season.

Charming finds a note from Regina in Snow's saddle bag while they wait for her to lower the shields. It's a thank you note for convincing her not to bury her heart in the woods, and for trying to save her life. Snow correctly guesses that Regina is not planning on reuniting with them.

A scene with Emma and Regina outside the town hall was cut from the episode. Emma runs toward Regina and then stops to have a conversation with her. Both of them then disappear into the town hall.[3] 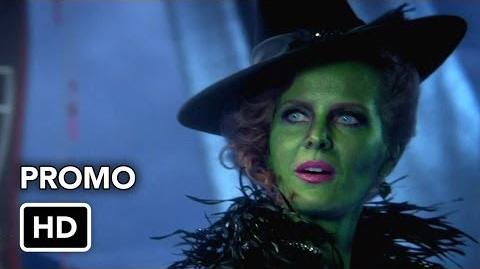 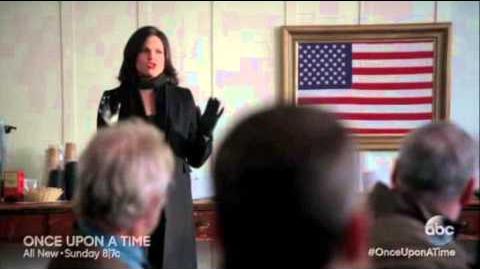 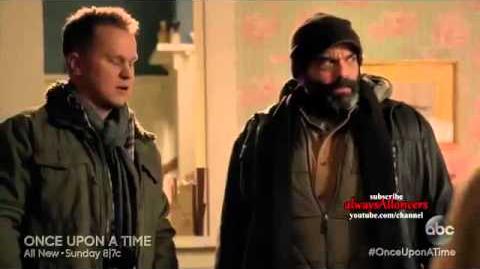 Retrieved from "https://onceuponatime.fandom.com/wiki/Witch_Hunt?oldid=955209"
Community content is available under CC-BY-SA unless otherwise noted.