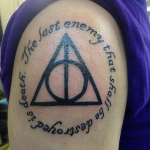 Hello, I am Prince of Hearts, one of the friendly administrators on the wiki.  I also help with the ongoing transcript project and I am on the team that selcts the weekly poll. One of the things I am always working on is making sure the pages are consistent with one another. My own personal project is making sure the timelines are up to date with current knowledge and making sure the contiuity on the other pages is accurate. In addition, I am always looking for the past tense in "History" sections and Recaps and changing it to the present tense, as that is one of my biggest pet peeves (One NEVER discusses any form of narrative in the past tense). I have loved Once Upon a Time since the very beginning, and have come to love the Oncer community as well! If you ever need help with anything please do not hesitate to ask myself or one of the other staff members. Happy editing!

It's kind of fun to do the impossible.

I noticed a pattern: My favorite episodes revolve around Regina and Cora.

Other TV Shows I Enjoy

My Favorite Movies (In no particular order)

Favorite Disney Movies (really, all of them but these are the top)

Retrieved from "https://onceuponatime.fandom.com/wiki/User:Prince_of_Hearts?oldid=581412"
Community content is available under CC-BY-SA unless otherwise noted.