When I was a boy, my father sold me to a blacksmith. All day in front of hot coals, the sweat and the grime. But every night I would say to myself: "Think lovely thoughts!" And in my sleep, I would travel to the most wonderful place.

"Think Lovely Thoughts" is the eighth episode of Season Three of ABC's Once Upon a Time. It was written by David H. Goodman & Robert Hull and directed by David Solomon. It is the fifty-second episode of the series overall, and premiered on November 17, 2013.

Pan leads Henry to a secret cave, where he has convinced the boy that he alone can save magic and Neverland itself. But a showdown between good and evil is about to go down as Emma, Mary Margaret, David, Regina, Mr. Gold, Neal and Hook find themselves directly on a path to Pan in an effort to save Henry. Meanwhile, back in the Fairy Tale Land that was, young Rumplestiltskin is given a magical item that could help him make a fresh start with his father—who has been anything but a good dad.[2]

In a local tavern yard, a young boy, who is revealed to be a young Rumplestiltskin, begs a man not to hurt his father Malcolm, who is a 3-card monte cheat. Later on, Malcolm brings Rumplestiltskin to a cabin and asks the women spinning wool to look after him as he attempts to get a real job. Before he goes, he gives his son the corn husk doll as a present. Hours later, the women see that Rumplestiltskin has a huge talent for spinning. While Rumplestiltskin tells them that he believed that Malcolm will come back, the ladies tell him that he returned to the same tavern. The women give him a magic bean and advise him to take it and go someplace where his father's bad reputation won't follow him. Rumplestiltskin later return to the same tavern, and just as the ladies told him, sees his father playing games again. Rumplstiltskin coaxes Malcolm to go away somewhere and make a fresh start. Malcolm then remembers the phrase "think lovely thoughts," which he used to comfort himself when he was apprenticed to a blacksmith. So they use the bean to go to a place called Neverland, holding hands.

As they land in Neverland, Malcolm tells his son to imagine a cake, and it appears. He then tells him that in Neverland anyone can fly, but as he attempts to take off, he falls to the ground because he is now a grown-up. Malcolm remembers needing pixie dust, but Rumplestiltskin is too scared to climb up the tall trees that have the pixie dust flowers, so Malcolm tells him to wait and he'll get enough for both. He climbs up and sprinkles some dust on himself, saying "I want to fly," but just then the Shadow comes and mocks him, telling him he doesn't belong. On the ground, Rumplestiltskin weeps, thinking his father has met with an accident after one of his shoes falls from the tree, but then his father climbs down to comfort him, telling him that Neverland is only for children. Unfortunately, as Rumplestiltskin suggests they go somewhere else, Malcolm says he knows he would just go back to his old ways if he did. The Shadow then comes to take Rumplestiltskin, believing it is the only way the father can believe he's a young man. As the Shadow takes Rumplestiltskin away he witnesses a green spell coming over Malcolm, who suddenly turns into the infamous Peter Pan, a name that Rumplestiltskin had given his lost doll. After he returned to stay with the women he tells them of what had happen, as the women believe that he would be better off without a father.

As Emma, Neal, Hook, David, Tinker Bell and Mary Margaret walk through the forest towards Pan's camp, Emma confronts Mary Margaret about staying behind with David, which made Emma concerned that she will once again be separated from her family. As Regina and Mr. Gold emerged from another location, the reunion does not goes smoothly as Neal tells everyone involved that Gold was planning to kill Henry because of a prophecy. They all draw their weapons on him, but Gold proves his legitimacy by handing over Pandora's Box to earn their trust, and tells Neal he has no idea who he's up against as Gold explains to Neal that Pan was responsible for his father Malcolm's demise. Despite this, Neal made sure that Gold does not use magic and Gold agrees to it. Meanwhile, Hook and Emma discuss Neal's fate and the future of David when Gold says he may know a cure, as he has an elixir that may counteract the effects of the poison. As they finally reach Pan's camp, the party come up with a plan to keep the Lost Boys at bay, so Regina waves her hand and the Boys doze off. They then hear Wendy and Emma see her in cage, and Neal breaks her free. She's startled to see Neal, who she knew as Baelfire, now grown up. She explains that she went back to Neverland to save him, because she remembered Neal telling her that his parents were dead, to which a stunned Gold replied "You told them that?" But Bae says that it was better than saying his father abandoned him. At first, Wendy lies to the rescuers about where Pan is, but Gold recognizes she's lying and she comes clean, and admits that Pan really wants the heart of the truest believer so he can be immortal, which is actually Henry's heart. It's a trade, she says, because once Pan has the heart, Henry will die. Neal promises he will save her brothers and Regina tells Wendy that John and Michael are safe in Storybrooke. They make a plan to rescue Henry, and send David to Dead Man's Peak to get water to make a cure. Emma then tells everyone involved that they will all return home once they rescue Henry. So Emma, Regina, Gold, and Neal race off to Skull Rock.

As the individuals prepare their plan of attack, Peter Pan and Henry arrive at Skull Rock, where Pan tells Henry (who is unaware that Pan is actually his great grandfather) that he can save [[magic}}, and Henry believes him. As they enter the caves, Pan cast a protection spell to keep anyone with a shadow out. The individuals then reach the island, where Gold eventually penetrated the spell because he has no shadow. The other members finally believe that he wants to save Henry and Neal gives the box back to him, followed by Regina and Emma casting an eclipse spell so they can enter. Henry and Pan finally enter a large chamber that contains a large hourglass on top of a pedestal of golden skulls that shows the magic slowly fading, indicating how much time is left for magic in Neverland. After looking at this, Pan tells Henry it is time to save magic, but he now wants to use Henry's heart rather than believing in it, then lies to Henry that he'll live forever in Neverland if he does this. He then is interrupted by a presence, as Gold shows up to confront his father and to stop him from going through with this and takes out the box. Pan says they are really alike because both abandoned their sons, but Gold says he regretted leaving his son the moment he let him go and spent the rest of his life trying to get him back. Pan then responds "Why do you think I call myself Peter Pan?" and asks Gold to put the box down so they can make a fresh start. After Gold refuses, he waves his hand over the box but nothing happens, as Gold discovers Pan switched boxes, and Pan waves his hand over the real one and places Gold inside it. Pan then returns to finish his scheme to take Henry's heart by giving him magic to allow him to remove it. As Henry succeeds in doing so, Emma, Regina and Neal arrive to stop Henry from giving it to Pan, but Pan tells Henry that they are lying to him because they are adults even as they tell Henry they believe in him because they love him. Unfortunately, Henry, believing that he can save magic, gives his heart to Pan, who has now emerged victorious in his plot to become immortal. Henry dies as a result. 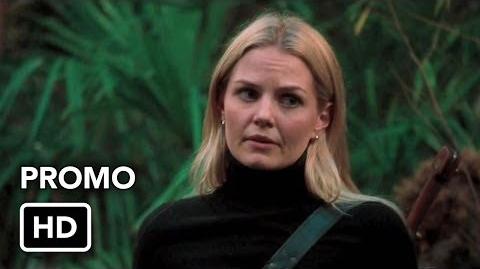 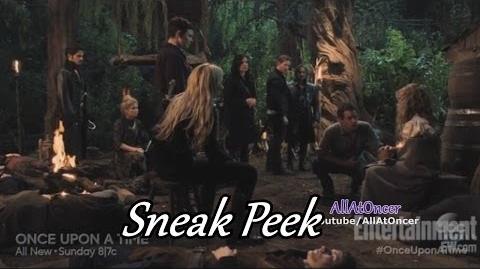 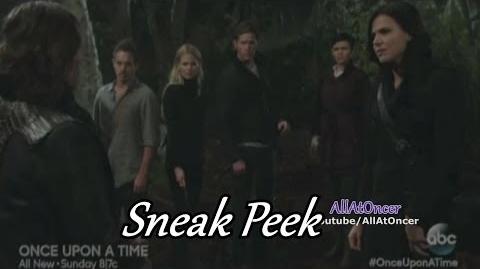 Retrieved from "https://onceuponatime.fandom.com/wiki/Think_Lovely_Thoughts?oldid=943336"
Community content is available under CC-BY-SA unless otherwise noted.