Did you really think it would be that simple, dearie? If you want that sword, you're gonna have to pay the price.

”
—The Darkness, under Rumplestiltskin's appearance, to Emma Swan

"The Price" is the second episode of Season Five of ABC's Once Upon a Time. It was written by Andrew Chambliss & Dana Horgan, and directed by Romeo Tirone. It is the ninetieth episode of the series overall, and premiered on October 4, 2015.

In an effort to protect Emma, Regina steps up in a surprising way that will test her mettle as a force for good. King Arthur and Queen Guinevere throw a royal ball to welcome the heroes to Camelot, but when the celebration takes a deadly turn, David and Robin must leap into action or lose a crucial asset in the fight to save Emma. Back in Storybrooke, Hook deploys a tried-and-true technique in hopes of bringing Emma back to the light while the heroes discover that some unexpected baggage has followed them home from Camelot.[2]

King Arthur and Queen Guinevere announce that they will throw a ball for their Storybrooke guests. They find Merlin is imprisoned in a tree, according to his prophecy, only the Savior can free him. But, the Storybrooke transplants worry that Emma will become darker if she uses her magic, so Regina lies to King Arthur and says that she is the true Savior. Regina and Emma search Merlin's tower for clues but run out of time as the evening's ball approaches. Before the dance, Percival visits Regina and woos her with a necklace to wear and she puts it on, but later decides that she cannot go to the ball, claiming that she needs to continue her research to free Merlin. When she later admits that she does not know how to dance, Mary Margaret helps her find a suitable gown while David teaches her how to dance.

At the ball, everyone makes their grand entrances and the couples dance. At David's encouragement, Henry introduces himself to a girl and shares his iPod Nano. Leroy convinces Belle to stop worrying about Rumpelstiltskin and gets her to dance. Percival reveals that he saw Regina slaughter his family as a child, outing her as the Evil Queen. Observing her through the enchanted necklace confirms suspicions. Percival kept this from Arthur because he would have prevented him from killing Regina. Percival attacks Regina. Robin steps in and fights him, only to be stabbed in the process before David kills Percival. Regina is desperate to save Robin, but her magic does not work due to an enchantment spell placed on Percival's sword. This prompts Regina to ask Emma to help save Robin by using her magic, but Hook does not want Emma to trigger her dark side. King Arthur does not blame them for Percival's death, saying that his action was inexcusable. Arthur suspected Regina's identity but says that Camelot is a place of second chances. He confesses to Guinevere that the new arrivals are suspicious, but they are his only hope of freeing Merlin and finding Excalibur's missing piece. Emma decides to help Regina despite the risk. The magic triggers Emma's Rumpelstiltskin vision, who warns her of a price to save Robin's life. Emma ignores the manifestation and uses her magic to save Robin. But the process triggers her darkness, as forewarned by Hook, with Emma's hand resembling that of a Dark One.

The new curse has the residents fearful of Emma. The Dwarfs attempt to escape the town; Dopey steps over the town line and is immediately turned into a tree. Hook asks Belle for advice on how to deal with loving a Dark One. Belle tells Hook, "It's far easier to hate the Dark One than it is to love one." At the marina, Henry summons Emma and apologizes for whatever happened in Camelot. Emma explains she doesn't blame him. Regina tells Henry to get far away from Emma, then tries to convince Emma that she could save Storybrooke. Emma disagrees.

The Storybrooke residents discover that Arthur and the Camelot empire was transported back with them. David admits to Arthur that Emma had been the Dark One all along. While Robin helping the displaced Arthurian, a ghostly, winged entity grabs him in the woods and takes him away.

Hook summons Emma because he loves her too much to stay away. Emma brings Hook to her new house, where he notices a locked door. Emma attempts to seduce Hook; but when true love's kiss fails to break the darkness's hold on her, he rejects her. Emma is mad that he cannot accept her for who she is now. He is angry at her for keeping what happened at Camelot a secret. Emma says giving it away would be "no fun."

Belle learns the monster that took Robin was a Fury. Someone did not pay the price for saving Robin in Camelot. The monster has arrived to collect Robin's soul as payment. It will return to the Underworld when the moon reaches its zenith but can be stopped if someone gives their life in his place. Regina confronts Emma, believing that she summoned the Fury, but Emma reveals that Regina was the one responsible for its appearance. That night near the pond, the Fury pulls out Robin's soul. Charon appears as the moon reaches its zenith. Regina sacrifices herself for Robin. Mary Margaret, David, Leroy and Arthur join her. As all five band together, they pull Robin from the Fury, which disappears back into the underworld with Charon. While everyone celebrates this latest victory at Granny's, a worried Mary Margaret notes that if they win, Emma will lose. Henry introduces himself to Violet again and shows her what a jukebox is, and plays the same song he had played in Camelot, which, somehow, seems familiar to her. At home, Emma opens the locked door and goes downstairs, at the behest of Rumplestiltskin's manifestation, revealing the stone with the sword Excalibur in it. Rumplestiltskin says she can make it whole again and use it to vanquish all the light forever. Emma tries to pull the sword from the stone but the sword's magic repels her. The Dark One taunts her, and tells her that to complete the task, she will have to pay the steep price.

In the morning, Regina, while walking on the street, sees Emma's yellow bug near the sheriff's station. As she walks in, she calls for Emma, but one one answers. After she sees her red leather jacket on a chair, she becomes upset and her phone rings. It's David, who tells her that he hasn't found Emma either, but now they have a bigger problem.

An alternate version of the scene where Hook meets Emma by the yellow bug. Emma is wearing one of her signature black Dark One coats; the same coat that she was wearing at the docks earlier in the episode (in the actual episode, she is wearing a simple black dress). She walks towards Hook with a sinister grin on her face and pulls him in close to her, but Hook is not impressed.[3] 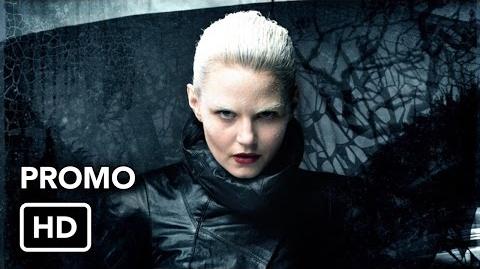 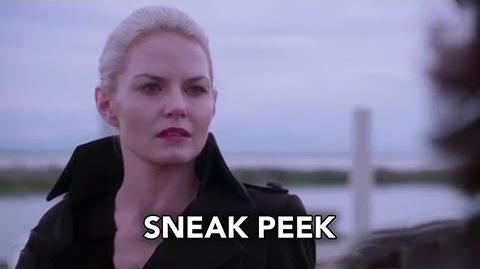 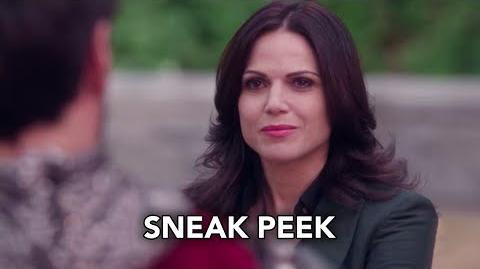 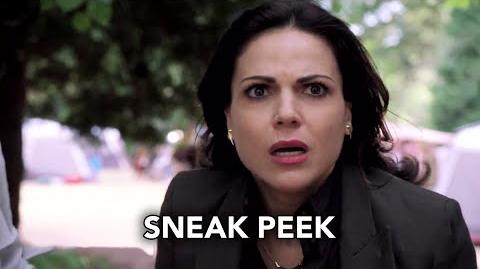