I know who has the Jolly Roger. And we're gonna take her back.

"The Jolly Roger" is the seventeenth episode of Season Three of ABC's Once Upon a Time. It was written by David H. Goodman and directed by Ernest Dickerson. It is the sixty-first episode of the series overall, and premiered on April 13, 2014.

Ariel returns to Storybrooke and pleads with Hook to help her find Prince Eric, who never returned to the town when the new curse was invoked. Emma agrees to let Regina teach her how to use magic so that she can help defeat Zelena, and Mary Margaret and David try to prove that they can be just as much fun as Hook is with Henry—who thinks they are boring. Meanwhile, in Fairy Tale Land during the past year, an angry Ariel confronts Hook over her missing Prince Eric, who she assumes was kidnapped and possibly killed by the swarthy pirate. But when Hook confesses that the Jolly Roger has been stolen and Eric is most likely the thief's prisoner, Ariel unknowingly provides him with a clue as to who the culprit is, and Hook – with Ariel in tow - goes off in search of his ship.[2]

In fairytale land Hook, dressed in armour, steals a chest full of gold and jewels with the help of Smee and other unknown men. They then celebrate at a tavern, where the crew has paid for a woman to spend the night with Hook. The pirate, however, pays and tells her goodnight. Just after he is ambushed by none other than Ariel, who tells him that "you're going to pay for what you've done."

Back in Storybrooke Emma and David try to assemble a crib for the unborn baby, while Mary Margaret expresses her worry regarding Zelena and Gold. David explaines that the crib is a statement: "we will not lose another baby."

Regina then enters and tells them that she has created a protection spell which cannot be undone by blood magic, so the baby is safe.

Emma believes that the best strategy is to attack before Zelena does, and therefore asks Regina to teach her again. Regina accepts with the conditions that Emma will take it seriously, and they will be doing it Regina's way.

After Regina leaves, the Charmings offer to watch Henry, but get a shock when Emma confesses that Henry finds them boring because of all the baby talk.

Hook and Smee are at the docks and discuss why they are not teaming up again. Hook explains that Zelena is still a threat, one you should not take lightly, and that there is not a safe passage.

Smee asks him of the location of the Jolly Roger, but Hook says that he has no intention of leaving Storybrooke because of Emma, which is implied as they are walking up to them at the exact moment the words are spoken. Hook warns Smee that if he ever brings up this discussion, there will be consequences.

Emma then asks Hook if he could watch Henry, and Hook flirts with her, and tells her if she wants to get close with him, all she has to do is ask. She tells him about her teaming up with Regina, where Hook comments that "it's the most reasonable plan so far." He tells her that it is about time to embrace the magic that is already a part of her, but Emma only wants to embrace it for the battle against the Wicked Witch of the West, and afterwards she is done with Storybrooke. She wants to give Henry the life she always wanted for him.

Hook advises her that no matter how much you wish you could go back to your old life, you cannot do it.

Mary Margaret and David walk along the shore discussing Henry and what they can do to change his mind, when they see a crowd of people surrounding something. They find Ariel, back into her human form. She too does not remember a thing about the past year, and tells the Charmings that she had been searching for Prince Eric, who has gone missing. She returns to Storybrooke in hopes that she has overlooked something, and the Charmings point her in the direction of Hook.

Back in the Enchanted Forest, Ariel is holding a sword to Hook's neck and accuses him of kidnapping Prince Eric, which Hook denies, and uses her momentary confusion to turn the tables on her. Ariel is not convinced, as one of Prince Eric's crew men had escaped and told them the name of the ship: The Jolly Roger. Hook, not having the ship in his possession, orders her to tell him about the commander of the ship. The crew man got away with the same dagger that Hook was holding against Ariel's neck, engraved BB. Hook then returns to the tavern to get his crew and informs Smee that the commander is Black Beard, the most cutthroat pirate to ever hoist a sail, after Hook of course (Smee corrects himself after Hook glares at him). Smee warns Hook not to tempt fate, and Hook confesses that the ship is the part of him that is missing, and talks about it as if it is a woman.

Ariel then walks up to him and demands to go with him, and despite Hook's warnings, she is allowed as she quotes the pirates' code: "Any valuable information a pirate captain retains, shall be compensated in equal favor."

Back in Storybrooke, Hook is sitting with Henry at the diner, when the Charmings come through the door with Ariel. They tell him of Eric, and Hook lies and tells them that he has not seen him.

Regina and Emma are in the vault, and the queen's plan is to "create a solid fundation first and then build your skills from the ground up", but Emma is not paying attention to her words, but rather the things in the vault. Regina comments that Henry and Hook have been spending a lot of time together, and tells Emma that Hook has been sending her "yearning looks", which Emma denies.

At first, Regina tries to teach her by books, but then from inspiration from Rumplestiltskin, she transports them to a bridge, where she'll be teaching Emma how to swim (Regina mentions that Rumple would make his students learn how to swim, and if they couldn't, they'd drown).

Back at the diner, the quartet (Hook, Mary Margaret, David and Ariel) decides that Hook and Ariel should head over to Mr. Gold's shop, as many of the items they had in Fairytale land have been returned to his shop. Eric's items might be there too and could be used to track him with a locator spell.

Returning to the Fairytale Land flashback, while walking, Ariel's cloak gets stuck in some bushes, and Hook rips it by using his hook to free her. She angrily says that it was Eric's cloak which he had asked Ariel to keep safe and to have a piece of him with her. Hook then tells her that it doesn't matter as Eric's probably dead, because when meeting Black Beard, one should prepare for the worst. Ariel admits that she was surprised over the fact that Hook might have been responsible for kidnapping her prince, as he had reunited Snow White with her family in Neverland, but Hook tells her that he is not a hero, he is a pirate.

In present-day Storybrooke, Ariel reunites with Belle, who has started to sort through some of the things, and they start looking for clues. Hook goes into the back room and discovers, through his telescope, Eric's cloak. He then lies to Ariel and says that he remembered Eric being from a Maritime Kingdom. This proves that Eric has made the journey back to Storybrooke, and an ecstatic Ariel hugs Hook.

Back at the bridge Regina explains that by pushing Emma's instincts to the furhest, her magic will be mastered. Regina then starts removing the boards of the bridge and making it collapse. Emma begs her to stop and Regina yells at her to stop denying what's inside of her.

Emma then falls, and for a moment Regina fears that she is gone, when Emma rises up by collecting the boards and making them float in the air. Regina is however not pleased as Emma has been wasting her potential.

Belle pours the locator spell on the cloak, and the trio follow it.

Back in Storybrooke, Ariel and Hook are following the cloak until it sinks underwater. Ariel breaks down and Hook apologizes.

Mary Margaret and David go to extremes to appear cool to Henry by allowing him to drive a car, and they succeed in destroying a mail box.

At the docks Ariel thanks Hook for finding the cloak and tells him that he has a true heart and she is grateful for his help.

In Fairytale Land, Hook has made his decision and makes Black Beard walk the plank. Ariel then comments that she was wrong about him and that his empty heart will bring nothing but wasted years. She then dives into the water to search for Eric.

In Storybrooke, Hook catches up with Ariel and tells her that they have met before in the missing year and tells her about their adventure. He apologizes and swears to her that he believes in love because of Emma Swan, the woman who broke his heart. Ariel then thanks him and transforms into Zelena.

She tells him that Ariel had found Eric and they had been together ever since. Zelena wants to corrupt him and curses Hook, so the next time Emma and Hook kiss, she will lose her magic. Hook warns her that he will tell Emma about it, but Zelena threatens to hurt the people around her like Henry. Hook later visits Emma to check on Henry, but at Emma's questioning he tells her about the supposed day he had with "Ariel". Emma then uses magic on a mirror, which shows the reuniting of Ariel and Eric.

The Charmings and Henry return to the apartment and tell them about their day, where Regina reacts quite strongly against the fact that they have been teaching him to drive, covering it up by taking on the role as the mayor.

Emma then tells him that it doesn't matter what happened the past year, as she is tired of living in the past, and so is he. Regina, Henry, Emma, Mary Margaret and David then eat at the diner, while Hook is across the street looking at Emma through his telescope. 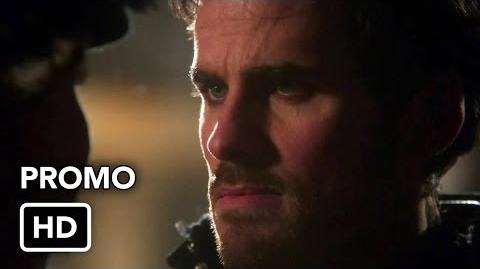 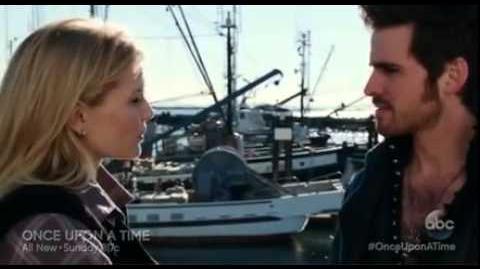 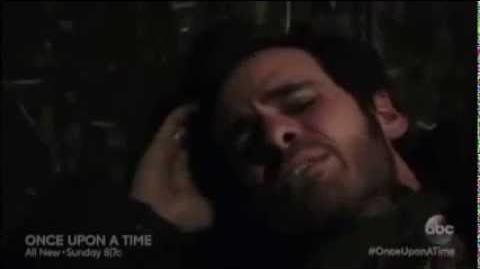 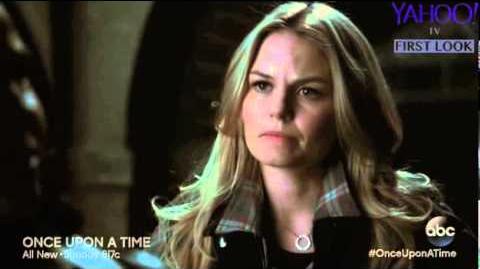