The fight to control my darkness has just begun.

"The Dark Swan" is the first episode of Season Five of ABC's Once Upon a Time. It was written by Edward Kitsis & Adam Horowitz and directed by Ron Underwood. It is the eighty-ninth episode of the series overall, and premiered on September 27, 2015. This episode is the fifth-season premiere.

Immediately after becoming the Dark One, Emma disappears and the heroes must band together to save her, but first they have to find her, which will require the help of an unlikely ally. Meanwhile, in the Enchanted Forest, Emma struggles to resist her dark urges as she searches for Merlin in the hope that he can stop her transformation. Along the way to Camelot, she gets help from the plucky and brave warrior princess Merida, as well as King Arthur and his Knights of the Round Table.[2]

In a movie theater in 1989 Minneapolis, Minnesota, a young Emma Swan watches The Sword in the Stone. She steals a woman's candy bar, and an usher approaches her and tells Emma "Don't do it". She expects him to reprimand her. He says, "When you do something that you're not supposed to do, even if you're doing it for the right reason, bad things will happen". He also mentions that she will have the opportunity to remove Excalibur from its stone and warns her not to touch it, before he disappears.

King Arthur, Sir Lancelot and Sir Percival, arrive to the location of the stone where Excalibur is embedded. Sir Kay has found it first and as he tries to pull the sword out, he turns to ash. Despite this, Arthur proceeds with his mission and manages to pull the sword out, only to discover that the tip is missing. He vows to seek out the missing piece, which is revealed to be the blade of the Dark One's Dagger.

Moments after Emma absorbes the Darkness and vanishes, leaving behind only the Dagger with her name on it, everyone is left stunned, bewildered, and angry at each other. Regina is furious over what Emma has done. Mary Margaret still believes that Emma has good in her and that she can be saved. Hook takes the Dagger to summon her back, but to no avail; as Regina explains, Emma has gone to a different world. Later, the Apprentice shares that Emma is now in the Enchanted Forest. Merlin's wand, which contains all the light magic, can help them find Emma. But, the wand can only open a portal to another realm if "two sides of the coin" wield it, the light and the dark. The Apprentice dies and drops the wand. Regina picks up the wand but cannot use it, as she no longer has darkness anymore; they need someone "wicked".

Regina and Robin Hood go to the hospital ward to see Zelena. Zelena agrees to help if she could see the wand, but needs something meaningful to Emma so the spell will work. Zelena cannot use her magic unless Regina removes the magic-restricting cuff. Regina refuses. Later, at Granny's, Hook and Henry plan to release Zelena. She escapes from the cell, after cutting off her hand to remove the magic cuff, before reattaching her hand. Zelena takes Robin captive and trades him for the wand, which she intends to use to return to Oz. Zelena opens a portal, which takes the form of a cyclone and drains her powers. Regina takes advantage of Zelena's weakened state to put the cuff back on her wrist, as well on redirect the portal to take them to the Enchanted Forest, using Emma's blanket to locate her. The cyclone heads towards Granny's Diner, and transports everyone inside to Emma's location.

Emma emerges through the Vault of the Dark One. The voice of Emma's darkness haunts her and manifests as a personification of Rumplestiltskin. She struggles to resist, and vows not to hurt her family. Then, Emma runs up to a peddler, but is angered into choking him. The Dark One tricks Emma into using a transportation spell, and she sees a will-o-the-wisp. The Dark One tells her that for the Wisp to answer her question, she will have to catch it. As she chases it, Emma comes upon a red-headed archer named Merida, who nabs the wisp and places it in her bag. Emma confronts Merida, using dark magic, and tries to convince her that she needs it to find Merlin. Merida is reluctant to trust Emma, but decides to go with her, keeping the wisp in her bag. Merida informs Emma that more wisps can are born at the Hill of Stones, so they head in that direction.

Emma learns that Merida needs the wisp to restore DunBroch and save her triplet younger brothers who were kidnapped by her country's United Clans after they refused to let her rule as queen. After they make camp for the night, the Rumplestiltskin manifestation tries to guide Emma into betraying Merida once they reach the home of the wisps. The Rumplestiltskin manifestation tells Emma that once Merida speaks into the Wisp, it will do her bidding until she dies, and thus, the only solution would then be for Emma to kill her. Merida overhears the conversation, and sneaks off to the Hill of Stones by herself. Rumplestiltskin's manifestation goads Emma, against her better judgment and good nature, to rip Merida's heart out. Before Emma can crush the heart, Hook appears with the others and talks her down from it, and she restores Merida's heart. Once everything has settled down, Merida thanks Emma for showing her that she has darkness in her, too; she was about to kill the clan leaders who kidnapped her brothers and the experience has convinced her to spare them. Mary Margaret hands Emma the dagger; but, Emma, believing that carrying the dagger would give her too much power and too much temptation to embrace the darkness, wants someone else to have it. She decides to give the dagger to Regina, due to her previous dark deeds, which makes her the only one capable of killing Emma if necessary. Moments later, King Arthur and some of his knights arrive on horseback to proclaim that they have been awaiting Emma's arrival. Arthur believes that Emma will be able to reunite them with Merlin, and everyone involved joins forces on their quest en route to Camelot.

Six weeks after the group entered Camelot, they awaken in Granny's Diner wearing Arthurian attire. They find that their memory ends with them entering Camelot. To make matters worse, Emma has embraced the darkness, acquired the Dark One's Dagger, and vows revenge against the others for failing her.

The former site of Granny's Diner has been transformed into a beer garden. Mr. Clark, driving the Sheriff's car and wearing a red leather jacket similar to Emma's garment of choice, pulls up in front of the beer garden to witness a ribbon cutting ceremony with Bashful, Dopey and Walter in attendance (the dwarves who didn't leave for Camelot – note that Mig Macario and Jeffrey Kaiser are both listed in the episode's press release, even though their scene was cut).[3][4]

The beer garden in front of Granny's Diner has been wrecked, presumably due to the diner landing after being transported back to Storybrooke. Emma, fully transformed into the Dark Swan, is wearing a long black robe and can be seen near the wrecked beer garden.[4][5] 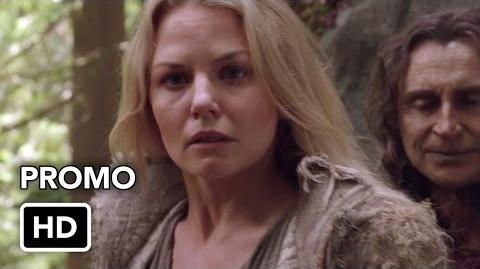 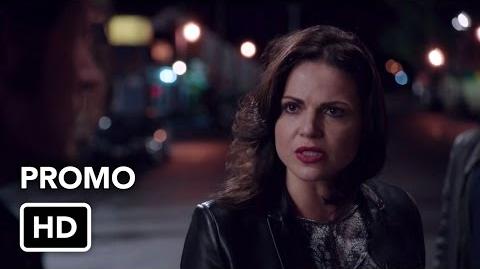 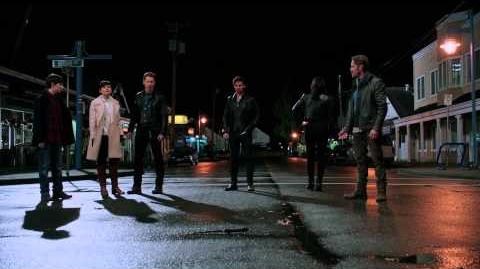 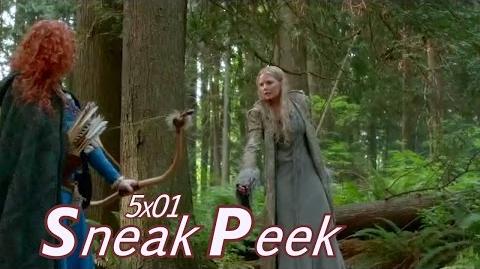 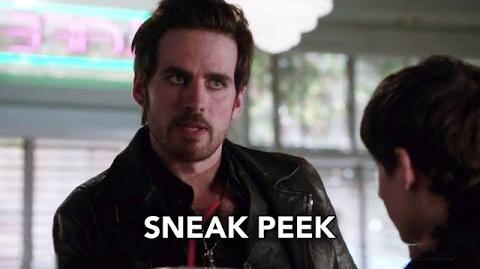 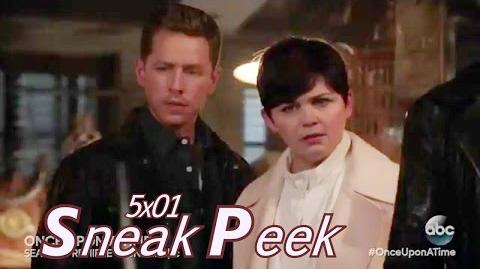