Let me die a hero. That's the man I want you to remember.

"Swan Song" is the eleventh episode of Season Five of ABC's Once Upon a Time. It was written by Edward Kitsis & Adam Horowitz, and directed by Gwyneth Horder-Payton. It is the ninety-ninth episode of the series overall, and premiered on December 6, 2015.

The dark siege of Storybrooke is underway as all of the resurrected Dark Ones target a living soul for sacrifice so that they can return to the realm of the living. With doom imminent, Gold advises Mary Margaret, David and the rest of the heroes to spend their last fleeting moments enjoying the company of their loved ones. Emma, however, refuses to give up, knowing that she is responsible for righting all the poor choices she made as Dark One - there's only one problem, Dark Hook. When they face-off with the fate of Storybrooke at stake, Hook's actions will devastate Emma in a way no one saw coming. In a Fairy Tale Land flashback, the Evil Queen tests Hook's mettle by forcing him to confront a demon from his past before contracting him to dispatch one from hers.[2]

One stormy night, aboard a ship on the sea, a young Killian Jones, scared of the dark calls out for his father, who enters the quarters to relight the doused lamp. He tells Killian that everyone is braver than they think and if one should ever feel afraid, all they have to do is look inside their heart. A reassured Killian goes back to sleep.

The same night, Killian awakens again, only to find his father gone, worried, Killian wakes up his brother. He opens the door, only to find an old sailor coming into his quarters and tells him that his father was a fugitive and traded his sons and the ship to the sailor for a row boat; so he could escape from soldiers waiting at the next port.

In present day Storybrooke, Hook awaits a brave Mr. Gold, he mocks him for taking his powers and that now he has nothing. Mr. Gold replies that he bested Hook, Hook counteracts this by telling him that he may have won the battle, but not the war. An infuriated Mr. Gold tries to stab him with a sword but Hook only poofs up behind him to tell him that now he shows his true self; a lonely and power-hungry coward. Hook states that now he will finally have his revenge.

Mary Margaret argues that this is a man Emma loves, But Emma sadly states that the man she loved died in Camelot and that there is only the Dark One left of him.

Near Granny's Diner, Robin and Regina set out for the harbor to find Dark Hook and are interrupted by Zelena. Zelena argues with Robin over the custody of their child but Zelena states that soon they will be dead anyway and then their daughter will be hers. Seconds later the duo face a group of Dark Ones, after Zelena disappears.

In Mr. Gold's pawnshop Emma signals Henry to enter, he cries for help and Emma rushes outside only to find Nimue facing her son. She immobilizes Emma and walks right through Henry and disappears. A worried Emma rushes to embrace a startled Henry.

They are soon joined by the other heroes who look just as confused. Regina asks about what happened, to which Mr. Gold states that he has the answer. He tells them to check their wrists to which everyone but Emma finds a mark imprinted on their flesh. Mr. Gold states that this is the Mark of Charon.

Henry immediately enlightens everyone with the information of the situation, that Charon is the ferryman to the Underworld.

Gold warns the heroes that the Dark Ones are only here in Storybrooke temporarily and in order for their stay to be permanent, they would have to trade places with the marked heroes as passengers of Charon, and Gold also gives a bigger warning: that their death is going to be most unpleasant.

Emma however refuses to give up on her family and asks if there is a way. Gold sarcastically replies that they have time; time to ponder on their deeds and spend their last moments with their loved ones.

A while later an army of undead Dark Ones prepare for the final battle.

Regina meets Hook at the docks and argues that revenge is not the answer. She also reminds him of their past dealings long ago to which an angry Hook chokes Regina before walking off.

Long ago in the Enchanted Forest on the grounds surrounding the Evil Queen's palace, Hook awaits the Queen's carriage, they review their deal about assassinating Cora in exchange for a passage to a Land Without Magic.

Back in Storybrooke, at the vault, Henry, Emma and the heroes sift through books of spells looking for a way to remove the Mark. A sad Mary Margaret states that she doesn't want to spend her last moments this way.

Emma surprised at her mother losing hope is told that hope is something one should hold on to but none can escape death.

Henry remarks that they should have one last dinner together as a family at Granny’s Diner to which everyone agrees. Regina meets Emma and she tells Regina that she will take the powers of all Dark Ones in order for her family to be spared and warns her that this must be kept a secret.

Later an ignorant Belle who is unaware of the situation, meets Gold who gives her the keys to his car and urges her to leave Storybrooke and see the world. Mr. Gold weeps as he sees the mark on his wrist.

Regina and Emma enter the shop and ask Gold for Excalibur. Gold now realizes that Emma will use it on herself to vanquish the darkness forever. But he states that Excalibur can only be wielded by someone worthy.

Emma ignores this and goes to meet her family while Regina goes to rescue Robin's children from her deranged sister.

At Regina's office, Robin and Regina confront Zelena who is viewing different shades of green. Regina uses her magic to transport Zelena and herself up to the clock tower where Regina summons a cyclone to send her wicked sibling back to Oz.

At Granny’s all enjoy a family meal except for Emma who leaves a note and then departs from the restaurant as she bids a tearful goodbye.

Back in the Enchanted Forest Hook learns that his father fell in love again and had a third son. Infuriated at this betrayal, he kills his father who pleads him to change with his dying breath.

At Emma's house, Emma pleads Hook not to take revenge but he doesn't heed and goes through with his plan.

At the lake leading to the Underworld all the heroes are joined by Emma who apologizes for failing. Regina tries to talk Hook out of sacrificing them but fails.

Nimue proceeds to choke Emma, moved by love and pity, Hook orders her to stop and absorbs the Darkness of all Dark Ones into Excalibur and orders Emma to kill him.

A reluctant Emma states that she wouldn’t lose love again but he pleads with her and overcome by sadness she does so and weeps incessantly.

A happy Belle rushes to embrace Mr. Gold after finding out the truth about his selflessness.

Grieving in her home, Emma starts hearing whispers from the dagger agan. Emma texts Gold to meet her at his shop, where she tells him that she can hear the dagger calling to her. Gold confirms that he created a second dagger; he didn't know Emma would be able to hear it since previous Dark Ones are usually dead. He tells her that he became the Dark One after Killian passed on, as he could not pass up the chance of reaquiring his power and now he has the combined power of every Dark One that had existed - including Emma herself.

Emma infuriated at his actions tries to harm him, but is stopped by his magic. However, this only serves to further fuel Emma's anger; she's expreinced losing loved ones more times that Gold has, and she's willing to break his heart by telling Belle that he's once again relapsed and become a villain again. Gold wonders if Emma could really do such as thing; in her state of mind, all Emma can say is "Try me." Seeing that he can't win, Gold asks what Emma wants in exchange for her silence.

At the loft, Mary Margaret is shocked to hear that Emma is planning to head to the Underworld to bring back Hook. Both she and Regina caution Emma against giving into the darkness; however, Emma tells them she's giving into love. She's bringing Hook back, the same way they brought back David; Emma is going to split her heart in two and give half to Hook.

At the lake, Emma, Mary Margaret, David, Henry, Regina and Gold have gathered. Gold cuts his hand, letting blood fall into the lake. Charon arrives, and they board his ferry to the Underworld.

Hook comes into Evil Queen's palace saying that he passed her test, which is killing his father, and throws his father's shirt onto the ground. The Queen then remarks that he's exactly the man he used to be. After they agree to never speak about this again, Regina enchants his hook with a potion in order for him to take her mother's heart.

A scene involving the departure for Camelot of King Arthur, Guinevere, Merida, Violet, Sir Morgan and the rest of Camelot people was filmed. Henry and Regina were also present in this scene.[3] The group say their goodbyes and Merida is guarding Arthur as if he is a prisoner. The group then enter a portal.[4]

At the loft, Emma explains her plan to go to the Underworld. David and Mary Margaret prepare to join her, but Emma doesn't want anyone to risk themselves for it. Regina convinces her to accept the heroes' help. Although both of his mothers won't allow it, Henry, too, offers to journey with his family and points that he was able to find Emma in Boston when he was just ten, meaning that, if they don't agree to take him, he will find a way himself. The scene follows as aired, with Robin Hood asking how Emma plans to cross realms.[5]

I'm sorry but I can't let you
all pay for my mistake.
Deep down, you know I'm right.
So please, promise me you'll
move on and find happiness
and help Henry grow into
the best man he can be. That's
enough for me. To die knowing
the family I always wanted
is safe.
I will love you all forever.


By the grace of the King this constitutes a document
of passage. A pass per unit. For passage and safe [illegible]
to pass through any portus* or gate and permission [illegible]
liaise to pass through the dominions of any king, prince
baron or Earl. This also is a decree to ensure
unmolested passage even though what may be an enemy [illegible]
a [sic] antagonistic realm. This document [illegible] all [illegible]
concern to allow the bearer to pass freely without [illegible]
and to afford the bearer such assistance of [illegible]


In this eighth year of the realm. 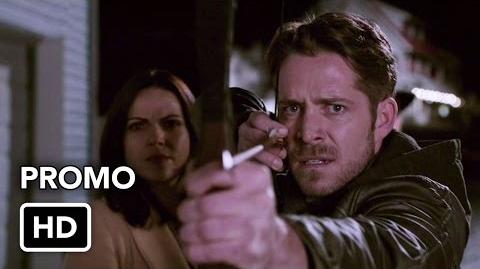 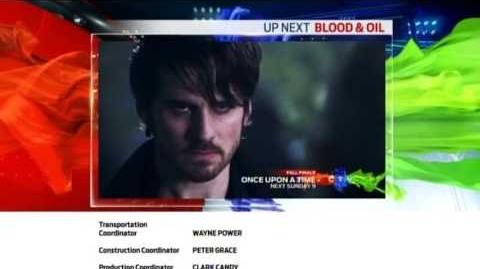 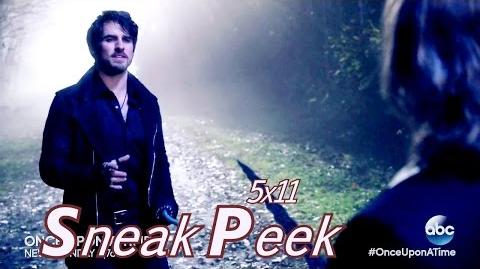