"Souls of the Departed"

"Souls of the Departed"

They're not the dearly departed. They are dead, wretched souls.

"Souls of the Departed" is the twelfth episode of Season Five of ABC's Once Upon a Time. It was written by Edward Kitsis & Adam Horowitz, and directed by Ralph Hemecker. It is the one hundredth episode of the series overall, and premiered on March 6, 2016.

Emma, Regina, Mary Margaret, David, Robin, Henry and Gold arrive in the Underworld, on a mission to rescue Hook, only to discover that their search will be more difficult than they had anticipated. The inhabitants of the Underworld—all souls with unfinished business and many with quite personal vendettas—hound our heroes at every turn. Meanwhile, in an Enchanted Forest flashback, a familiar face from the Evil Queen's past returns to present Regina with the perfect birthday gift.[2]

Emma Swan awakens in her yellow Bug, parked in a closed amusement park. As she looks around, Neal Cassidy addresses her from the back seat. Shocked, Emma asks him if she's dreaming. Neal, joining her in the front seat, assures her that she is not dreaming, and compares the encounter to "a long distance call from an old friend." He asks her how their son is doing. Emma tells him that Henry is fine, and asks him if they are in the Underworld, recalling that she was on her way there.

Neal tells Emma that he knows she was headed to the Underworld, and tells her not to go. He informs her that the Underworld is not an easy place to leave, and although he knows she wants to save Hook, the situation will not end the way she thinks it will. When Emma tells Neal that she would have gone after him too if she knew it was possible, Neal informs her that she wouldn't have been able to, as he is not in "limbo". Emma asks if Hook is in the Underworld, Neal tells her he is, and Emma reveals her plan to split her heart and share it with Hook. She asks Neal for help, but he tells her that the Underworld "is for people with unfinished business" and he doesn't have any, which is why he isn't there. Emma asks him where he is, and Neal replies that he's someplace where he's happy, and he came to her to warn her. He asks her again to give up her plan. Emma tells him that she can't, and Neal responds that he knew it, but still had to try. He kisses her forehead and tells her that he loves her, then exits the car. Emma says his name, touching the window, and suddenly awakens on the boat transporting her, Mary Margaret Blanchard, David Nolan, Regina Mills, Robin Hood, Henry Mills and Mr. Gold to Underbrooke. Mary Margaret asks Emma if she's okay, and Emma assures her parents that's she's fine. Mr. Gold informs the group that they've arrived.

The group disembarks, and finds themselves walking along the main street of an eerie, run-down version of Storybrooke. The clock tower lies in the road, and Emma's burned bug sits on blocks outside the Marine Garage. Emma wonders how the Underworld can look like Storybrooke, and Gold replies that her questions are pointless. He reminds the group that the residents of the Underworld are "dead and trapped because they have unfinished business". Cruella De Vil drives by in her distinctive car, and Mr. Gold reminds Emma that Cruella is there because of her. He reminds the group that many of the residents are there because of them, and advises them not to dawdle. Emma suggests the group split up, and they do. As Regina and Robin Hood fall in together, they pass by a man graffitiing the Any Given Sundae sign, who stops to gaze at Regina.

In the Enchanted Forest of the past, the Evil Queen and her Black Knights arrive in a village, with all its residents standing outside holding various gifts. A peasant woman wishes the Queen a happy birthday, proffering her a pie. Regina samples the filling, which is blueberry, calling it "not bad", but declaring that she prefers apple. The woman looks frightened as Regina addresses the crowd, telling them that while they don't have the present she wants, they will get it for her--"Snow White's heart on a plate". She informs the crowd that she knows Snow White has visited, and approaches the woman with the blueberry pie, gesturing toward her chest. Blacktooth, a man in the crowd speaks up, stopping the Queen. He informs her that he can tell her where Snow White is, but wants something in return. Refusing to deal with him, the Queen uses her magic to choke the man, demanding he tell her "where that wretched girl is". A voice responds "Behind you!"

Snow White, armed with her bow, Prince Charming, Grumpy, Bashful, Doc, Dopey, Happy, Sleepy and Sneezy stand among the villagers. Snow White suggests that they end the conflict. Regina blows out the fireball in her hand, telling Snow White that she's lucky it's her birthday, and disappears.

A short time later, Regina stews in her palace. Her father suggests that she should give up on revenge and move on. Regina tells him that she won't give up until she adds Snow White's hear to her collection. Her father tells her that he understands that she loved Daniel, but her mother is to blame for his death, and tells his daughter not to let her win by becoming the "merciless Queen" she wanted her to be. The Queen reminds her father that her mother does not control her, reminding him that she banished her to Wonderland. Her father informs her that while she holds on to her quest for vengeance, her mother will always have a hold on her.

In present-day Underbrooke, Blacktooth approaches Cora in the Mayor's office in Underbrooke Town Hall. He informs her that "she" is here. Cora thanks him, and asks how her daughter is doing.

Elsewhere, Mary Margaret enters Underbrooke's version of Granny's Diner. Behind the counter, the Blind Witch breathes deeply, recognizing her as Snow White. Mary Margaret tells the Witch that she is looking for a friend, and describes a man with dark hair and a hook for a hand. The Witch recognizes the description has Hook, but informs Mary Margaret that he hasn't been to the diner. David enters and, noting that his outfit has changed, Mary Margaret asks him if everything is okay. He assures her it is, and as she begins to tell him that the Underworld is creeping her out, he kisses her. Breaking the kiss, he comments, "I see why my brother likes you", revealing himself as David's deceased twin, Prince James. James deduces that, since Mary Margaret is in town, so is his brother. He gives Mary Margaret a message for David: "There's a new Sheriff in town." He takes a coffee from the counter and exits through the back of the diner.

The real David Nolan enters, catching a brief, shocked glimpse of his brother's back. Emma and Mr. Gold also enter the diner. Mary Margaret informs Emma that there is no sign of Hook at the Town Hall or park. Emma worries that Hook might not have any unfinished business, and may not even be in the Underworld. Mr. Gold reminds her that Hook died as the Dark One, and is in the Underworld. He tells the group that he wants to do things his way, and may have something in the Underworld that can help. He exits the diner alone.

Henry enters via the passage to Granny's inn, holding a key. He tells Emma he was checking the rooms, and Emma recognizes the room number as the one Neal used in Storybrooke. Henry tells her that he wanted to tell his father that he is "okay". Emma assures him that his father knows. When Henry asks how she can be sure, Emma, with tears in her eyes, responds that she just is, and tells Henry that Neal is in a better place.

Regina and Robin Hood walk along the town's main street. Robin remarks that the town's resemblance to Storybrooke is "uncanny". Regina remarks that she "conjured" Storybrooke using the Dark Curse, and speculates that the creator of the Curse got their inspiration from the Underworld. Robin suggests the opposite might also be true.

Regina stops suddenly, accusing Blacktooth, also the man she saw grafittiing earlier, of following her and Robin. She asks him why, and he responds, "Someone wants to see you."

As Regina, Robin and Henry arrive at the docks with the others to leave the Underworld, Regina admits that she doesn't want to leave them, which makes Mary Margaret become upset and hug her. As they walk, Henry tells Regina that her father is the only person she ever loved once and that now she's trying to make up for she did to him, which Regina says that what she did she can never make up for. Henry then asks her why he is named after her father. Regina explains that it was never about her, it's about her father himself. Out of all of her bad life, her father is the only person who believed in her and gave her hope. And Henry showed her that she can find happiness again, just like her father did. After a brief moment, she decides to no leave, because that's exactly what her mother wants. After they hug, Regina explains that she's helping her new family. 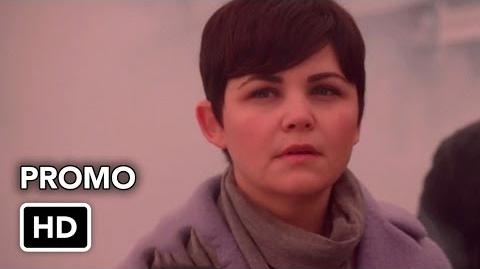 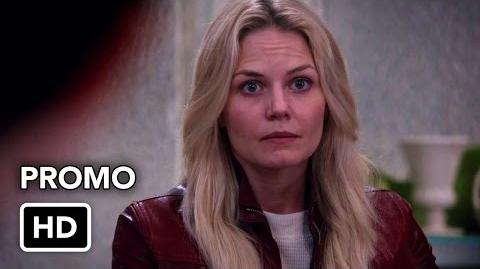 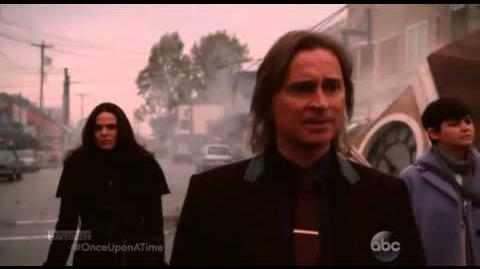 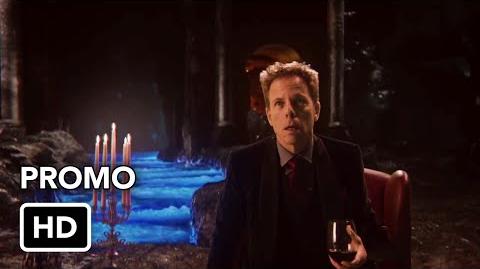 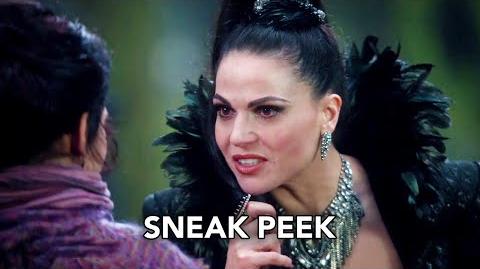 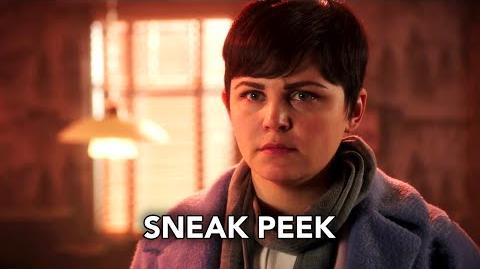 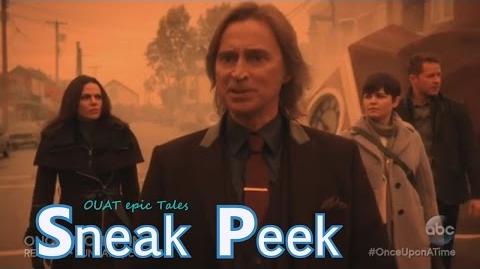 Emma Receives A Warning From Neal - Once Upon A Time