Ruby: Well, yeah, but I almost lost you.
Dorothy: You didn't. You came back for me.
Ruby: I always will.

"Ruby Slippers" is the eighteenth episode of Season Five of ABC's Once Upon a Time. It was written by Andrew Chambliss & Bill Wolkoff, and directed by Eriq La Salle. It is the one hundred and sixth episode of the series overall, and premiered on April 17, 2016.

In flashbacks, Ruby and Mulan find themselves in Oz, where they meet Dorothy. After the three witness Zelena’s return to Oz, they look for a way to defeat her once and for all. However, Dorothy mysteriously disappears, and Ruby’s search for her new friend lands her in the Underworld. Reunited with the heroes, Ruby teams up with Emma, Regina and Snow to continue looking for Dorothy. Meanwhile, Snow and David struggle with not being able to be with their son, Neal, and devise a plan so that one of them can escape the Underworld.[2]

A scene where Ruby and Mulan are standing next to a green and gold, pyramid-shaped portal on the ground in Oz,[3] was deleted from the episode.

so tangible and intoxicating to her, was merely in her
head. It was a thought that was too crushing to
bear, not to mention that it also meant Dorothy would
be doomed to lie on that dais forever. Ruby could hardly
take the pressure, and suddenly she needed someone by
her side to reassure her, someone who could instantly
put all this turmoil into perspective.
Fortunately Snow White was only a few feet away from
her. Dorothy turned to her uneasily, and Snow nodded
her on, as if to share a little of her own courage.
You can do it, Ruby", Snow said. "Go on."
[image begins] was enough to bolster Ruby, who turned back
[image begins]ing up the courage to say something
[image begins] toward anyone before. But
[image begins] to look at Dorothy in
[image begins]. Ruby's eyes
[image begins]ew she
[image ends]

And then she leaned down and kissed Dorothy. For her,
it was the kiss of a lifetime. She felt a jolt of electricity
pass from her lips to Dorothy's. And just as she was
[shot ends]

The normally bustling Munchkin
Village was unusually quiet. In
fact, it had been quiet for quite
some time, ever since the tragic
day an armor-plated female war-
rior had brought the Munchkins
the somnolent body of Dorothy
Gale, along with Dorothy's dependent Cairn Terrier
Toto. This was brave and loyal Mulan, who had
sworn to Dorothy after she discovered her friend
had fallen victim to a sleeping curse at the virescent
hands of the Wicked Witch of the West. And protect
Dorothy she did, placing her on a dais in the middle of
town, and watching over her in a silent vigil, day by
day. And the normally jovial Munchkins stood by her,
day by day also, their jovial spirits drained by the sight
of their beloved Dorothy gripped in an eternal slumber.
And Toto stood by them also, loyal to the very last, his
snout forever bowed at the feet of his fallen master.
The streets of Oz had never before seen such a tableau
of tragedy and despair, and yet here it was every day,
with not a soul in the realm able to do a single thing to
help Dorothy.

And so this tableau repeated every day, until one day, a
miracle happened.
Right smack dab in the middle of a particularly long
bout of silent, mournful meditation, Toto started bark-
ing. The yapping came so fast and furious that for a
brief moment, Mulan thought it was another of Zelena's
destructive cyclones, and she immediately drew her
sword, ready to take the Wicked Witch on with her
trusty blade. But there was no cyclone. No Wicked
Witch. In fact there was... nothing. Toto was barking
at thin air.
"What is it, Toto," Mulan said. The poor little dog
didn't answer back, he just kept on barking. Only it
wasn't an angry, defensive barking. It was an excited
barking, a barking of recognition. Mulan half expected
the little ball of fur to hop up on his hand legs and do a
dance of joy when finally she and the Munchkins saw
what Toto had been able to detect moments before them.
In a great whirling poof of magic two people suddenly
appeared on the street. One of the people Mulan had hoped
to see. Even expected to see. And there she was in her
bright red cloak.
"Ruby?" Mulan said. 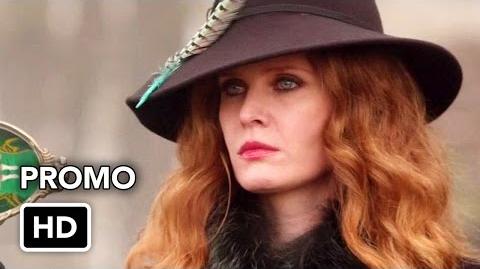 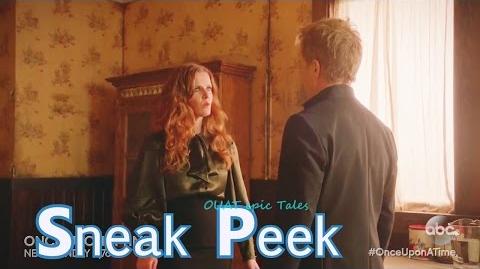 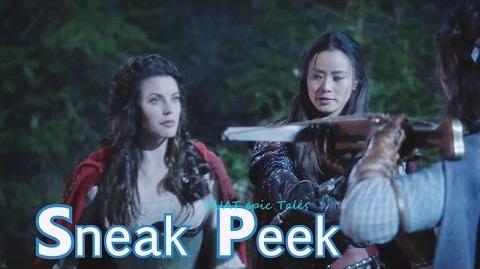 Hook And David Bond - Once Upon A Time

Retrieved from "https://onceuponatime.fandom.com/wiki/Ruby_Slippers?oldid=942766"
Community content is available under CC-BY-SA unless otherwise noted.