Eventually, everyone turns on people like us. Even friends. Even family. They're just waiting for a reason.

"Rocky Road" is the third episode of Season Four of ABC's Once Upon a Time. It was written by David H. Goodman & Jerome Schwartz and directed by Morgan Beggs. It is the sixty-ninth episode of the series overall, and premiered on October 12, 2014.

When an icy spell is cast on Marian, which will ultimately freeze her heart and kill her, the Storybrooke residents place the blame on Elsa. But unbeknownst to anyone, a mysterious woman who runs the town’s ice cream parlor has the same powers as Elsa and is trying to frame her. Emma and David find former Merry Men member Will Scarlet rummaging through Robin Hood’s tent, Regina teams up with Henry to try and discover who the author of the fairy tale book is, Mary Margaret is having trouble balancing her duties as leader of Storybrooke and mother to young Prince Neal, and Hook begins to suspect that Mr. Gold is still in control of the dagger that calls upon him to be the Dark One. Meanwhile, in Arendelle of the past, Elsa and Kristoff set off to stop Hans from attempting to take control of the kingdom.[2]

As they walk down the streets of Storybrooke, Robin Hood is attempting to explain things to Marian while Roland begs his mother for ice cream. The trio goes into Any Given Sundae where the Snow Queen serves Robin and Roland some rocky road ice cream and serves Marian vanilla ice cream on a cone with sprinkles, which she secretly curses before giving it to her. In the next scene, Emma, Hook, and Elsa interrogate Mr. Gold about whether he knew Elsa was trapped inside the urn that he had in his pawnshop. Mr. Gold denies he did. Belle uses the dagger on him and proves to the trio that he's not lying.

In the next scene, Mary Margaret is holding a town meeting in the mayor's office while also taking care of Neal. The town is upset over Elsa's mayhem while Mary Margaret, David, and the Hood family defend her. As they speak, a strand of white begins to frost into Marian's hair and she collapses, causing a panic amongst everyone else.

At Granny's Diner, Henry is sipping on a mug of hot chocolate when Regina comes in and puts down some comic books for him. He is happy over her gift, to which Regina remarks that she wasn't sure which kind he liked anymore, so she got a bunch. As Henry begins flipping through one, Regina questions him about the writer of his storybook. He inquires why she is asking. At first, Regina says she wants to force the storybook author, before changing her wording, and explaining she wants to ask the author to rewrite a happy ending for her. Henry agrees to help her find him, and the two decide on the name of the mission to be "Operation Mongoose". Robin bursts into the diner and requests that Regina help Marian. Henry, Regina, and Robin rush to the town hall where Regina observes Marian. Emma and Elsa later come too. Elsa states there is only one way to save Marian, which Regina knows painfully, is true love's kiss. Robin then kisses Marian, hoping it will cure the curse, however, nothing happens.

When Emma decides to go and find the one truly responsible for the spell on Marian, Regina asks her to take backup because it seems like the town was busy saving the "savior" than the other way around. Emma asks Regina not to lash out at her and tells Killian that she can manage it on her own, and could he please stay out of it. But she is later shown to be disturbed by what Regina said.

In the meantime, Killian disobeys Emma, and he (along with Elsa) visit Mr. Gold with a strand of Marian's hair to find out who is actually behind the curse. When Mr. Gold doesn't seem to be in a mood for business as the duo have nothing to offer, Killian informs him that Mr. Gold can purchase his silence, as he knew that Belle never had the real dagger. Mr. Gold accepts and performs magic on the strand of hair turning it into snowflakes, revealing that this is indeed ice magic, but of a different kind from Elsa's. But like a snowflake, it is unique, and it will return (Mr. Gold says) to its source. Killian and Elsa follow the snowflake.

Meanwhile, Emma and David are in the forest, around Robin and Marian's tent where they split up to search for clues to whoever cast the spell. Emma discovers an intruder, and in her chase through the forest, she trips and loses him. However, David manages to capture him. The intruder is Will, one of the Robin's Merry Men, and also a thief, who offers a clue regarding the ice cream store, which he had tried to rob on the day of the power outage. He reveals that despite the power outage, all the ice creams seemed strangely unmelted. The trio visits the store and verifies the truth, although Will manages to escape after stealing money from the cash register.

As seen in a past flashback, Elsa is still frantic about her missing sister Anna. There is news that Prince Hans and his army are planning to attack Arendelle.  Kristoff secretly spies on Hans' and his brothers, and discover that their plan involves retrieving a magical urn that can trap magical beings of Elsa's kind. Kristoff and Elsa then set off in search of this urn. While Kristoff begs Elsa to destroy the urn immediately, Elsa is curious and wants to know if it can reveal more about herself. They are apprehended by Hans' party, who take the urn from them and open it in the hope of capturing Elsa. However, there is another that is trapped inside it.  And it is the Snow Queen, (who is the same lady who manned the ice cream store). The Snow Queen tells Elsa that she is her mother's sister, and promises to help her find her sister Anna.

Meanwhile, back in the present, Killian and Elsa discover the Snow Queen, who in turn discovers them spying on her. She traps Killian by frosting over his feet and trapping him in place. Elsa seems to have no recollection of the Snow Queen. The Snow Queen tells Elsa that her memory has been wiped out by the Rock Trolls and that her own sister Anna trapped her in the urn. The Snow Queen wants Elsa to learn the lesson that ordinary folk will always see them as monsters which is why she cursed Marian and directed the blame at Elsa, and which is also why she will now kill Killian. Elsa's magic cannot stop the Snow Queen.

Just when it seems Killian will die from icicles falling from the sky, Emma and David arrive just in time, and Emma's magic is powerful enough to stop the Queen. The Snow Queen is shocked by the sight of Emma, and it seems she knows Emma, though Emma has no recollection of her. The Snow Queen escapes. Emma is angry at Killian for having put his life in danger.

Later, Killian tries to charm Emma into having a drink with her, one that she refuses. He follows her, trying to tell her that he understands how it is to have the weight of the world on her shoulders, and how she finds it hard to trust him (an insight he hears from Elsa). However, Emma says that this is not about trust, but about her fears because the people she loved before him all died and she is afraid that anyone who loves her will die. Killian assures her that if there is anything he is good at, it is surviving.

Regina manages to remove Marian's heart from her chest before the ice touches it which preserves Marian's life. Now she just needs to find a cure to unfreeze Marian and return the heart.

The Snow Queen is seen walking away in the forest. Mr. Gold seems to be there, looking for her to cross by. It appears they know one another, and Mr. Gold wonders aloud why the Snow Queen has not yet come to him for help.  The Snow Queen says she will come to him when she is ready to make a deal, and Gold indicates that he is waiting eagerly for that day. He also asks if Emma recognized the Snow Queen, and shouldn't the Snow Queen be worried that she would.

This scene was released on the website of ABC News.

Mr. Gold, Belle, Elsa, Emma and Hook enter the barn of Zelena's farmhouse to get more information of how Elsa got into the urn and where Anna is. Mr. Gold asks Belle to give him the dagger, which is the fake one despite what everyone believes, and picks up some dirt from the ground. Mr. Gold explains that magic can change forms but it can never be completely destroyed and that this dirt can still neutralize any magic practitioner just like it did before. After they leave, Elsa comments that they still have nothing, but Emma encourages her, assuring her that they will find her sister.[3] 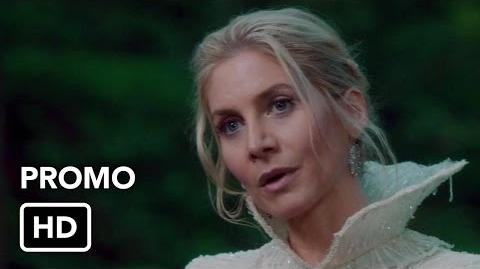 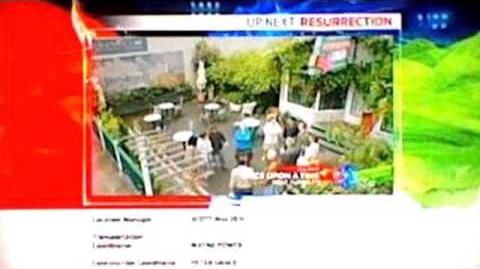 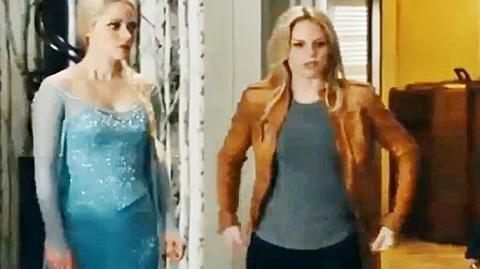 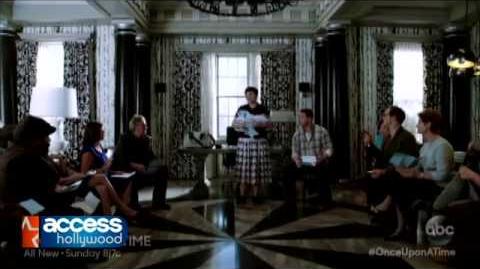 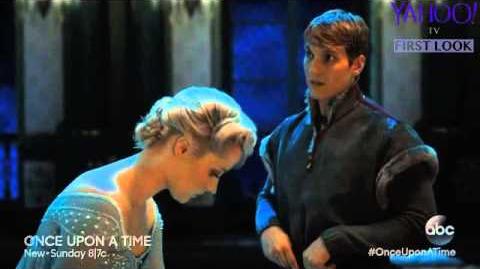 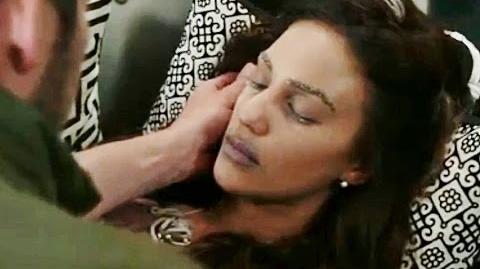 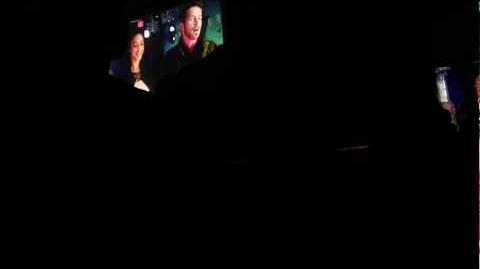 Retrieved from "https://onceuponatime.fandom.com/wiki/Rocky_Road?oldid=942058"
Community content is available under CC-BY-SA unless otherwise noted.