Template:Episode3 "Quite a Common Fairy" is the third episode of Season Three of ABC's Once Upon a Time. It was written by Jane Espenson and directed by Alex Zakrzewksi. It is the forty-seventh episode of the series overall, and premiered on October 13, 2013.

In their continuing quest to find Peter Pan's hideout and save Henry, Hook suggests tracking down Tinker Bell in the hope that she will lead them straight to his camp. Pan reveals to Henry why he has brought him to Neverland and in the Enchanted Forest, Neal has a plan that could transport him to Emma, but it would involve using one of Robin Hood's most precious possessions. Meanwhile, in the Fairy Tale Land that was, Tinker Bell offers to help Regina improve her life.[1]

This article or section is in need of serious revision.
You can help out the Once Upon a Time Wiki by adding or updating to the article, correcting grammar and spelling issues, and taking other steps to make the article great. If you need any help, please see our policies.
Reason: Completion

In Neverland, Mary Margaret, David, Regina, Emma, and Hook continue on their search for Henry. Emma now has a map to lead them to Peter Pan's camp, but she notices the location changes as Pan is moving his camp to throw the group off.

In the Enchanted Forest, Mulan and Robin Hood look on as Neal rummages through the Dark Castle trying to find something that will enable him to travel to Neverland. Little John soon arrives along with Robin Hood's son Roland. Upon seeing Roland, Neal figures out a way to get to Neverland.

The group in Neverland looks over the map attempting to figure out a way to get to Pan and Henry. A frustrated Regina once again suggests she use magic to teleport them to Pan's camp instead of walking. Hook believes that Pan will have shields up against magic so attempting to teleport there will result in their deaths. Instead Hook proposes that they uses someone Pan trusts to get close to him, namely a fairy that lives on the island named Tinker Bell. Regina dislikes the idea, claiming that Tinker Bell will not be able to save them.

In the past in the Enchanted Forest, the Queen dines on a lonely feast as her husband and step-daughter are away travelling. She is visited by Rumplestiltskin, who is there to reprimand her for missing her magic lessons. She tells him that she is unsure of continuing her magic lessons as she does not want a future like her masters. The Queen also complains she lives like a prisoner in the castle. The Dark One tells her there is no stopping her magic lessons now that she has begun and she should just embrace the darkness. Feeling angry, the Queen goes to her chamber's balcony and takes her anger out on the fence. She loses her balance and falls. Just before she hits the ground, Regina is stopped by a fairy. The fairy tells Regina she is giving her a second chance. Using magic the fairy levitates the Queen back up into her Chambers and tells the Queen her name is Tinker Bell.

Evil Queen: My happy ending looks like Snow's head on a plate.

Tinker Bell: Did you ever go back and find him? The man with the lion tattoo?
Regina: No.
Tinker Bell: Unreal. Do you know how selfish that is?
Regina: It's a lot of things. But how was it selfish?
Tinker Bell: Because you didn't just ruin your life. You ruined his. 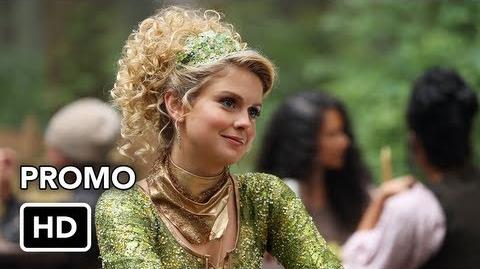 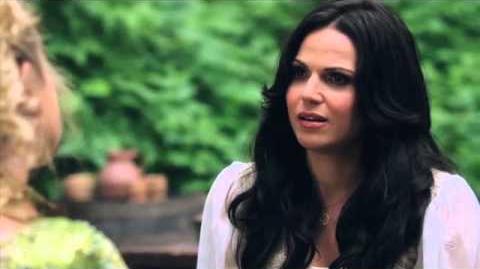 Retrieved from "https://onceuponatime.fandom.com/wiki/Quite_a_Common_Fairy?oldid=255354"
Community content is available under CC-BY-SA unless otherwise noted.