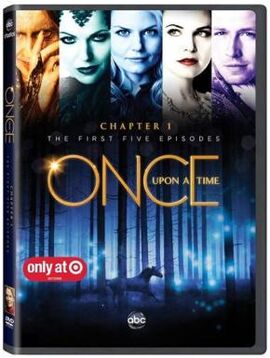 Once Upon a Time: Chapter One is an exclusive DVD collection of the hit television series Once Upon a Time, consisting of the first five episodes and a $5 coupon for the upcoming first season's DVD, scheduled for release in fall 2012. It was only sold in Target stores across the US. It was released on February 14, 2012.

"Immerse yourself in the mystery of Storybrooke—a sleepy little town where every fairytale character you’ve ever known is frozen in time and trapped between two worlds, all victims of an evil curse. Discover the first five thrilling episodes of ABC’s new hit series that has captivated audiences and critics alike with its unforgettable characters and its tangled web of romance, action and enchantment."

Retrieved from "https://onceuponatime.fandom.com/wiki/Once_Upon_a_Time:_Chapter_1?oldid=894673"
Community content is available under CC-BY-SA unless otherwise noted.