We never lived in a town called Storybrooke. We never took a flight from Boston to New York. We never did any of this.

"New York City Serenade" is the twelfth episode of Season Three of ABC's Once Upon a Time. It was written by Edward Kitsis & Adam Horowitz, and directed by Billy Gierhart. It is the fifty-sixth episode of the series overall, and premiered on March 9, 2014.

After Rumplestiltskin sacrificed his life to stop Pan from enacting another curse, Regina obliterated her original curse, which erased Storybrooke from existence and whisked its residents back to Fairy Tale Land – leaving Emma and Henry back in our world with no memories of Storybrooke. But all is not well back in the Enchanted Forest when Hook comes calling on Emma in New York City in an attempt to jog her memory so that she can once again help her fairy tale family and friends out of a desperate situation.[2]

In the Enchanted Forest, Prince Phillip rides on horseback to a pavilion where Aurora is waiting for him. She has prepared a lunch for them both. She playfully complains that he is late. Stating that she is hungry and has missed him, she adds humorously that she is cranky due to her pregnancy. Their tender moment is interrupted by the ominous sound of thunder. They turn to see a purple cloud of smoke rolling towards them. They attempt to outrun the oncoming tempest, but it passes through them. Phillip and Aurora are unharmed and see that a number of former Enchanted Forest inhabitants have appeared before them, consisting of Snow White, Prince Charming and others. Aurora is shocked to see Snow, and asks her what has happened. Snow simply replies, "We're back."

In a flash forward of one year, Emma is  in New York City. She enters an up-scale restaurant to have dinner with Walsh, who is revealed to be her current boyfriend. Walsh asks about Henry's recent science project, which Emma recounts went well, partly due to Walsh's help. After their meal, Walsh excuses himself and mentions, somewhat cryptically, that he'll be back. During Walsh's absence, Hook sits in his vacant chair, startling Emma. Emma, still having no memory of Hook, insists that he leave. But Hook is persistent, telling her that her current life is a sham and warning her that her parents are in danger. Hook says he has proof of this and hands her a paper with an address on it, claiming that the truth of who Emma is and where her parents are can be found there. Emma rebuffs him, to which Hook then states that they've met before a year ago. Emma denies this, claiming that a year ago she was in Boston where her apartment had caught fire, prompting her to move to New York. Hook muses that Regina's curse is the cause of these false memories. Once again, Hook implores Emma to go the address he has given her and that he'll be waiting to hear from her at Central Park. When he leaves, Emma is left confused.

In a flashback, in the Enchanted Forest, Snow White, Prince Charming, Hook and Regina are catching up on what has happened during their absence. Aurora reports that the ogres have since been defeated and that they are in the process of restoring their kingdom. Snow White also notes that Aurora is pregnant. Prince Philip says that they have much to celebrate and offers them all refuge within their kingdom. This earns a troubled look from Aurora. Prince Charming is grateful but says that they have their own castle to go to. Snow White reminds him that their castle was decimated by the curse. Aurora says that Regina's former castle still stands, however, as Regina had protected it. Prince Charming and Regina bicker over who is the castle's rightful owner: Snow White or Regina. Snow says that they are going to reclaim it and that Regina is going to go with them. Regina finds the idea laughable, but Snow White insists, arguing that being united will give their people the hope they need at this troubled time. They then bid their farewells. Now alone with Prince Philip, Aurora gives voice to her worries: that they must tell "her" that the people of the Enchanted Forest have returned. Philip is loathed to do so, being fearful of that this unnamed woman will do to them. But Aurora is more worried what "she" will do if they fail to inform her of their return, reasoning that she may harm their yet unborn child. Aurora says they just have to hope the Enchanted Forest folks can look after themselves.

Back in New York City, Walsh re-enters to a confused Emma. He asks her what the paper (which Hook gave her) is and she replies that it's nothing. She is then given a dish with a dessert on it, and says that she's full. He tells her to look at it, in which he turns the dish over to reveal a ring surrounded by a circle of chocolate, and afterward tells her he couldn't wait any longer and that he loves her and Henry. She is left speechless as he proposes to her.

She is then seen walking out of the restaurant, and Walsh catches up to her. She tells him that it's too fast and that they've been together for only eight months. After a brief conversation, he tells her that she could take as much time as she wants.

Afterward, Henry is seen playing a video game after Emma walks in. He asks her what she said, and she tells that she didn't say "no". After she says she needs more time, Henry points out that Walsh is not like his father because he isn't going to abandon them.

A year earlier, in the Enchanted Forest, everyone is making preparations for the Queen's castle. As the dwarves celebrate how handsome they look, Jiminy lands on Grumpy's shoulder and informs him that 50 more people from Storybrooke have arrived. After Prince Charming hears this, he find Hook loading up his horse. He tells Hook that he doesn't need to pack that much, as the Dark Palace in less than a day away, but Hook tells him that he is going to find the Jolly Roger. Neal then comes up to Snow and Charming, asking if he can revive his father, so he can bring him to Emma and Henry. They tell him that his desired task is impossible and he should leave it alone to give them their best chance.

As Henry is getting ready to go to school, he accuses Emma of worrying. She tells him that she is thinking and when he asks if it is about Walsh, she responds with a yes. After Henry leaves, Emma looks at the address Hook gave her and she goes there. She unlocks the door and when she sees a dreamcatcher, she realizes that she is in Neal's apartment. After looking around, she finds a camera with Henry's name on it.

Emma immediately meets Hook at Central Park to discuss with him. She asks him about the camera and if Neal is trying to get into Henry's life, but Hook insists that Henry left his camera there when he last went to Neal's apartment. When Emma asks for real proof, Hook tells her to drink the potion, she then handcuffs him to a bench and has him arrested for assault.

As everyone is making the journey to the Dark Palace one year ago, Neal meets up with Belle and she assures him that they will find a way to revive Rumplestiltskin. Snow White tells Prince Charming that she never imagined to return to Regina's castle with her. As she says this, Grumpy informs her that Regina is no where to be found. When she finds her in the woods burying her heart, Snow White manages to persuade her to put her heart back in her chest. As they are leaving, they are attacked by a flying monkey. Luckily, Robin Hood and his Merry Men are able to shoot the monkey down.

As Emma and Henry walk home, she tells him that she is thinking about marrying Walsh. He tells her that her arranged a date with her and Walsh. When they finally reach home, Emma tells Henry she forgot something and tells him to go. Emma takes a look at the photos she was carrying and is shocked with what she sees. At this, she bails Hook out of jail and asks her about the photos. He tells her it will only make sense if she drinks the potion. When Emma drinks it, she remembers everything that was wiped away.

Robin Hood, Regina, and Snow White rejoin the group and Robin Hood reunites with Neal and Belle. The group soon reaches the castle and realize that there is a protection spell surrounding the castle.

Emma and Hook have a drink and discuss the current situation back in her apartment. When he tells her there is a new curse, she asks what could've happened, but Hook doesn't know. She then asks him what he should tell Henry. As soon as she says this, the doorbell rings and it is revealed to be Walsh. Emma takes him outside and tells him they can't get married because she has to face her past. He tells her he wished she never drank the potion and tries to attack her. She fights back and eventually throws him off a cliff, killing him. When Hook finds her, she says that they will leave for Storybrooke in the morning.

The next morning, Emma is making breakfast when Henry asks about Walsh. She tells him that she just wants it to be the two of them. After Henry takes a bite of breakfast, he tells her he has to run to school, but Emma says he is not going to school because she has a "case" in Maine. He agrees to the trip and when Killian comes knocking on the door, they get ready to leave for Storybrooke.

When they arrive in Storybrooke, night has fallen and Henry is asleep. Emma tells Hook to wait with Henry while she talks to her parents. Emma goes to the Blanchard loft and finds David on the other side of the door. Him and Mary Margaret tell Emma that they do not remember the last year or who cast the curse.

A year ago, Zelena walks down a hall in Regina's castle and asks a flying monkey if it has Regina's blood. It drops the blood into a potion and it glows. Zelena gloats, saying that since she's wicked and Regina is evil, she'll win. 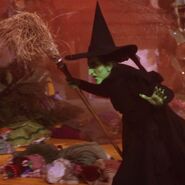 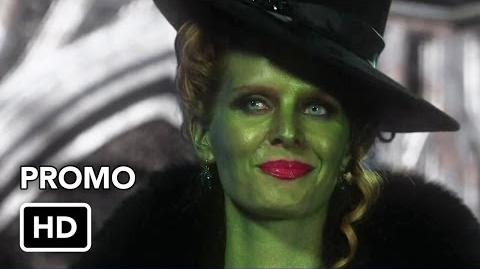 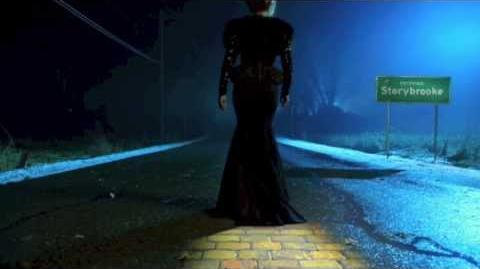 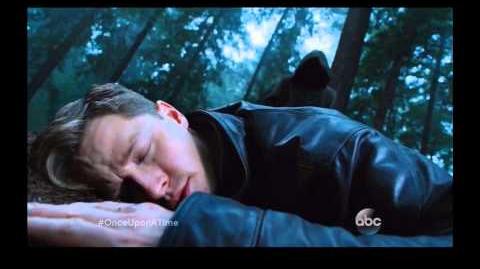 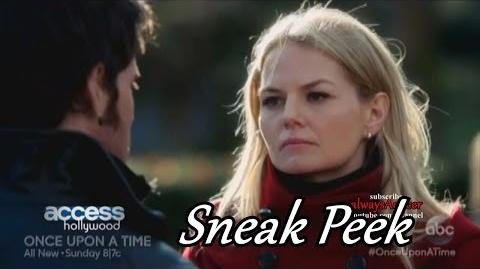 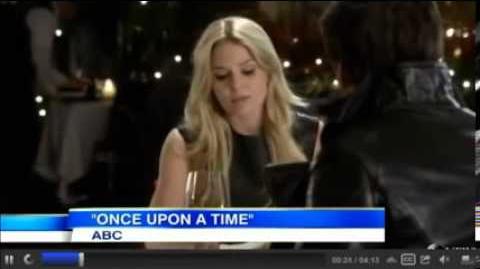 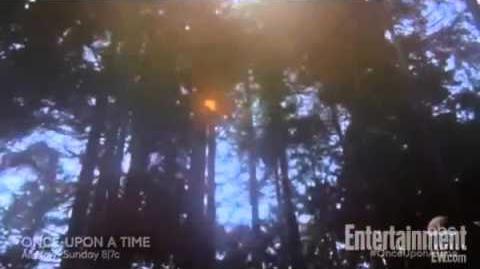