View source
watch 01:32
She-Hulk Trailer Dropped - The Loop
Do you like this video?
Play Sound

You didn't know our mother, Zelena, but I did. And yet we both suffered.

"Mother" is the twentieth episode of Season Four of ABC's Once Upon a Time. It was written by Jane Espenson, and directed by Ron Underwood. It is the eighty-sixth episode of the series overall, and premiered on May 3, 2015.

Emma returns to Storybrooke to reunite Lily with Maleficent while Regina and Robin Hood struggle to cope with the implications of Zelena's pregnancy. When Gold's health takes a turn for the worse, Isaac looks to a new ally for help procuring the magic ink he needs to re-write history. In a Fairy Tale Land flashback, Cora returns from Wonderland to beg Regina's forgiveness on the anniversary of Daniel's murder. Cora vows to help her daughter find true love, but Regina remains suspicious of her mother's intentions.[2]

Before the first curse, the Evil Queen stumbles upon an illegal wedding on her palace grounds. As punishment for the intrusion, she crushes the groom's heart in front of the wedding party. Regina finds a flower on Daniel's grave and spots Cora, who pays her a visit on the anniversary of Daniel's death. Cora apologizes and says she reconcile with Regina by finding her the love that Tinker Bell spoke of. But Regina, still upset with Tinker Bell, says she'll believe it when she sees it. Later at the bar, Cora learns from the Sheriff of Nottingham that Robin is a married thief. Cora glamours the sheriff with Robin's tattoo and clothing style. Regina notices the fake magical tattoo. The Queen makes the lion tattoo come alive and attack the sheriff to confess that Cora hoped Regina would fall in love and have a child.

The Queen ties the sheriff upside-down above a boiling pot in the dungeon as punishment. Cora magically sends him home and confronts Regina. Regina sacrifices her hopes to bear any children, by taking a potion that will leave her unable to do so, to "hurt" her mother and to prevent Cora from manipulating her. Cora explains all she ever wanted was for her to be happy. A pained Regina tells her mother that she doesn't want to hear any more. Then, she tells Cora to return to Wonderland, and that she doesn't need her.

At a New York City bar, Regina discusses with Robin, who had moved on with Zelena because she's pregnant with his child, and because he didn't realize until recently that "Marian" was Zelena in disguise. Robin tells Regina that Roland won't understand where his mother had gone, and Robin feels heartbroken to have lost his beloved Marian because Zelena killed her back in the Enchanted Forest. As a result, Regina agrees to use a forgetting potion on Roland to make him forget about the time he spent with "Marian" after Emma Swan brought her to Storybrooke, so he won't have to go through the pain of losing his mother again. At Neal's apartment, Emma holds the dreamcatcher and tells Lily about Neal's having lived in the place and tells her that Zelena was responsible for his death. Zelena, who heard the conversation, feels the baby kick in her tummy, and taunts her by telling her not to trouble an "expectant mother." Regina and Robin arrive back at the apartment, and tells Emma, Lily, and Zelena to pack up because "We're going to Storybrooke tonight." Emma drives her bug with Lily and Zelena, while Regina drives Robin's black minivan with Roland.

In Storybrooke, Emma can reunite Lily with Maleficent. Meanwhile, Regina and Robin Hood must find a way to deal with Zelena, even if they can find a way to be together. At Granny's, Lily asks her mother about what they are going to do about David and Mary Margaret, as she still has a grudge against them, but Maleficent states that she isn't up for revenge, and tries persuades Lily to stay in Storybrooke, begging her to stay because she won't be able to return if she leaves, and because Maleficent would turn back into dust if she tried to leave town with Lily. Lily decides to leave, so Maleficent approaches Mary Margaret and David for help.

Hook reminds Gold that he will do whatever it takes to keep Emma from going dark. Isaac tells Mr. Gold that Emma has to produce the ink since she has yet to succumb to darkness. Hook taunts Gold, saying he knows that each time he does a bad deed, his heart will grow darker, so he won't be able to do anything to stop Hook. After Hook leaves, Gold falters, as his heart grows darker, and he uses his magic to transport him and the Author to his shop to look up information on obtaining Blood Magic, in case they can't get Emma to turn dark. But, Gold's health continues to decline, due to his dying heart. Regina arrives, wanting Isaac's services since she was the one who wanted to find Isaac first, only to have Mr. Gold offer to Regina to help her find the Magic Ink for Isaac, to get both of their happy endings, displaying the magic quill. Regina states that she'll find the Magic Ink on her own and get her happy ending by herself. Gold objects, saying that if his heart dies, "Rumplestiltskin" will die, along with all his goodness, and warns her that she would not want to deal with an evil Dark One. Regina says he is in no position to bargain and takes Isaac and the quill as Gold passes out. In her vault, Regina learns that Emma's impending darkness is needed to get the substance. Isaac tells Regina that he worked for Mr. Gold because he protected him. Regina shows Isaac a picture of Regina being with Robin Hood. Isaac states that it was one of his "experimental writings," which he was planning to write about it in a separate book, but never got the chance, which gives Regina an idea. Regina approaches Lily after she walked out on her mother at the diner (after Maleficent refused to help Lily carry out her revenge plans, option to restart their life as mother and daughter), and tells Regina that she wants Mary Margaret and David dead. Regina tells Lily that most of her darkness came from Emma and that she needed it to be all worked up, which Lily responds to by telling her to buzz off. Unable to reason with her, Regina cuts Lily's hand to get her blood to get a sample of the darkness in her and turns it into magic ink. Then, she smiles and disappears while quoting "Welcome to Storybrooke." After Regina leaves, Lily's eyes glow yellow. She becomes reptilian, as rage consumes her.

Shortly afterward, Maleficent, Mary Margaret, and David encounter Lily in her dragon form. Mary Margaret runs after Maleficent, convinced that she may not be safe around Lily. David shouts to Mary Margaret that Lily is out of control as she knocks Mary Margaret out. Lily uses her fire to prevent David and Maleficent from reaching the unconscious Mary Margaret, before flying off. Emma shows up and immediately comes to her mother's aid, and uses her powers to heal her. Lily regresses to her human form. Maleficent confronts Lily, giving Lily her baby rattle, which she never got the chance to give her. Lily claims that she destroys everything she touches ever since Snow White and Prince Charming put Emma's darkness in her and that no one would want to be with her. Maleficent wouldn't mind "a little darkness." Maleficent convinces Lily to stay for a week to teach her some tricks. Emma forgives Mary Margaret and David for what they did.

After extracting Lily's blood, Regina and Isaac visit Zelena's cell at the Storybrooke Hospital. Regina plans to write an ending for Zelena and vows to have her written out of the story. Zelena says she got to know about Cora through Regina, claiming that she was exactly like Cora. As the ink dries, Regina tells Zelena that Cora wasn't a better mother and that she had wronged them both. Robin Hood comes in. Regina spares Zelena for now, albeit locked up. Regina realizes she no longer needs the Author to find her happy ending. This allows Isaac to write his way out of the hospital and leaves a message indicating a plan to write a new story that could change destiny. At his shop, Gold instructs Isaac to write a new story in which villains win, in a new book, titled Heroes and Villains. Isaac already has a new chapter for in store for everyone involved, beginning with the phrase, "Once Upon A Time..."

This scenes is included on Once Upon a Time: The Complete Fourth Season.

Returning home from New York, Regina is welcomed by Henry, while David gets Zelena out of the yellow bug. Robin Hood is skeptical about Zelena's inability to use magic, but Regina assures him that the enchanted bracelet will keep her powerless. Near, Emma reunites with Hook, just as Maleficent informs that she is taking Lily to the diner. Before the two leave, Emma calls Lily aside and threatens to use magic against her if she ever does anything to David and Mary Margaret. Regina then sends Robin Hood to retrieve a forgetting potion from her office so that Roland's recollections of the fake Marian are erased. David prepares to take Zelena to the sheriff's station, but Regina decides to take her herself somewhere else. As they all part ways, Robin Hood once more remarks that things can still work out, to which Regina replies there are things about her that he doesn't know.[3]

As described by Jane Espenson on the Season Four Blu-ray Audio Commentary.

The scene where Regina decides to spare Zelena's life, was originally filmed with Robin staying in the hallway outside her cell listening. Regina then went out to him after finishing her story about Cora. It was changed to Robin entering the cell during their conversation.[4]

Belle was originally set to appear in a scene where she is standing on/walking down the street outside the pawnshop, but the scene was cut. However, the scene can still be seen in an official promotional photo from the episode.[5]

Note:
*: Beverley Elliott is not credited in the episode credits, but she appears in the background of a scene at Granny's Diner.[7] 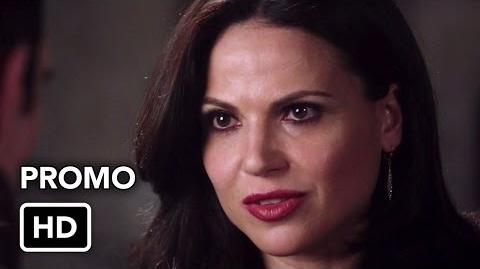 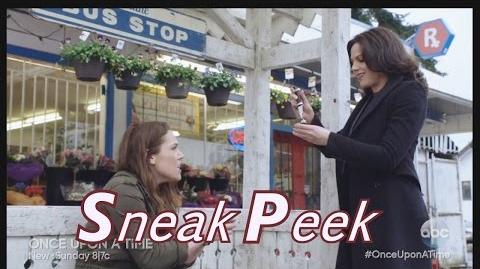 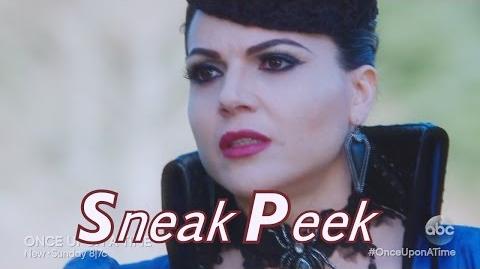