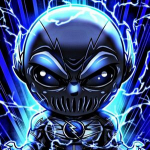 Feel free to message me and I'll try to answer as quick as I can.