So, the Charmings think their love is strong enough to defeat me? Well, there's one thing they don't know...

"Love Doesn't Stand a Chance" is a song featured on ABC's Once Upon a Time. It was written by Alan Zachary & Michael Weiner. It débuts in the twentieth episode of the sixth season.

Before First Curse
After the Magic Mirror shows her the entire kingdom singing, the Evil Queen expresses that Snow White and Prince Charming will not be able to defeat her as she kills two Black Knights. She expresses the belief taught to her when her mother killed her true love: love is weakness and does not stand a chance. In the process, she pays visits to several citizens of the kingdom who have also been singing, including Grumpy and the other Dwarves, Geppetto and Pinocchio, and Granny, threatening and terrifying them. ("The Song in Your Heart")

She later sings a version of "Love Doesn't Stand a Chance" while facing off against Snow White and Prince Charming. However, their song easily overpowers her, until she is able to pull out a Singing Spell that, unbeknownst to her, was left for her by Zelena and use it to extract the songs from the entire kingdom. The Blue Fairy later puts these songs inside of Snow White's unborn daughter's heart as they will one day be used to protect her from the Black Fairy and give her a happy ending. ("The Song in Your Heart")

After Third Curse
After her family is frozen by the Black Fairy and Mr. Gold, Emma Swan believes that the only way to save them is to give the Black Fairy her heart. As she prepares to do this, Henry Mills discovers a page from his book showing the Blue Fairy put the kingdom's songs in Emma's heart and rushes to her, revealing as the Black Fairy fails to crush Emma's heart that the songs give Emma power. Henry returns Emma's heart to her as she begins to sing, realizing that everyone she loves was with her throughout her life thanks to their song. ("The Song in Your Heart")

So, the Charmings think their love is strong enough to defeat me?
Well, there's one thing they don't know

Mirror, mirror, could not be clearer
That love is a waste of time
I'm here to tell you with love's magic spell
You cannot match the power of mine

Down with love, down with hope
Don't need blind faith to cope
Or inspiring songs in my heart

Mirror, mirror, the time draws nearer
For me to enact my curse
Those happy feelings that send them reeling
Will soon become the reverse

Down with love, down with hope
Don't need blind faith to cope
Or inspiring songs in my heart

Down with love, down with dreams
Down with goodness's schemes
Gonna rip the song right from their hearts

Got the magic I need
For my darkest of deeds
Watch my curse kill romance
Oh, love doesn't stand a chance

No, no, love doesn't stand a chance 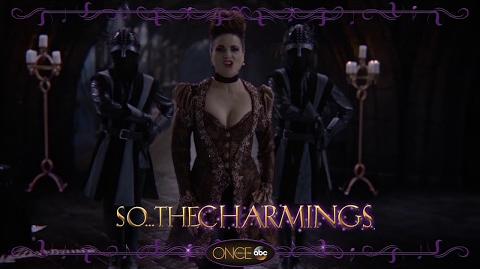 Retrieved from "https://onceuponatime.fandom.com/wiki/Love_Doesn%27t_Stand_a_Chance?oldid=879605"
Community content is available under CC-BY-SA unless otherwise noted.