It's like my whole life is darkness and... When you're around, things are brighter.

Lilith Page,[1] better known as Lily and also known as Starla, is a character on ABC's Once Upon a Time. She débuts in the fifth episode of the fourth season and is portrayed by guest stars Nicole Munoz and Agnes Bruckner.

At some point in the Enchanted Forest, a dragon named Maleficent mates with a male dragon and becomes pregnant from the union. She later stakes her claim on a cave and lays an egg that harbors her unborn child. Burning all of the surrounding lands as her territory, this sends all the inhabitants fleeing, as she places her allies Ursula and Cruella De Vil outside the cave as guards. Sometime during this period, Snow White and Prince Charming seek to keep their own unborn child from becoming evil by infusing another vessel, namely Maleficent's child, with darkness. The couple, perceiving the child of a villain would likely be just as bad as her mother, agree to steal the egg so the Apprentice can cast the spell. While still in dragon form, Maleficent is startled awake by the couple's thievery, and after reverting to human form, she pleads for Snow White's mercy. Snow White promises to return the egg once everything is settled, and as she runs off, a devastated Maleficent makes a failed attempt to stop her by throwing a blast at the cave entrance. When presented with the egg, the Apprentice casts a spell to plant darkness in it, and since such darkness will be a danger to this world, he sends it to another world. As a portal opens, the horrified couple looks on as the egg hatches, revealing the child's hand, as the infant lets out a cry. Realizing they have made a grave mistake, Snow White and Prince Charming try to save the child, but they are blocked by Cruella and Ursula, who are trying to save the child from the couple. Cruella and Ursula are then accidentally sucked into the portal along with the baby. ("Best Laid Plans")

Arriving in Minnesota[2] in the Land Without Magic, Cruella and Ursula choose to leave Maleficent's child in the woods to die, but they use the dragon egg she hatched from to prevent themselves from aging for thirty years. The baby is soon found, with a crescent moon necklace in her possession, and she is later placed in an orphanage. On 14th August, 1983,[1] she is adopted by the Page couple who name her Lilith. ("Sympathy for the De Vil", "Best Laid Plans", "Lily")

Despite being adopted into a family, Lily begins feeling invisible and unseen. Deciding to run away from home, she takes her father's credit card and disappears. At a convenience store in Hopkins, Minnesota, she spots a blonde girl, Emma, eyeing a pop tart box. When Emma notices her, Lily walks out of the aisle. Realizing the girl is stealing the box, she grabs a shopping cart and covers for Emma just as the blonde is nearly frisked by a store employee. Relieved, Emma expresses gratitude, to which Lily flashes a credit card and instructs her to use this method next time rather than stuffing stolen goods under a jacket. Emma begins leaving, but Lily suggests they team up. After buying food and exiting the store, Lily sees her father racing down the street in his car to haul her home. She escapes with Emma into an alley where they duck for cover. Later, they stop at a nearby lake and have a picnic with their food. Lily learns Emma is originally from a Boston group home and she ran away after realizing no one is going to adopt her. Emma assumes the man from earlier was Lily's social worker, and Lily goes along by letting Emma believe this. Pointing out a house across the lake, Lily explains that it's vacant during the fall season, and she wants to crash there with Emma, who happily agrees. Inside the house, following a video game session, Emma sees a star imprint on Lily's wrist. Lily imagines the star makes herself special, and she then draws a matching one on Emma's wrist. Upon finding a camera, they record themselves goofing off. Growing close, Lily and Emma promise to remain friends no matter what. Later that night, they awaken after hearing someone enter the house. The person is Lily's adoptive father as Emma learns of Lily's lies. While sitting in a car, Lily scribbles down her contact information so Emma can find her once everything blows over and they will run away together. Emma is hurt at her lies, but Lily attests everything she spoke of is real, despite having a family. However, Emma doesn't accept this and walks away, rubbing the star off of her wrist as Lily repeatedly calls after her. ("Breaking Glass")

Sometime after this, Lily is kicked out of her adoptive family's home and begins crashing at an abandoned house with her boyfriend. When they enter a store, her boyfriend throws her a gun, causing Lily to panic and follow his lead as they pull a robbery. While the police are looking for her, Lily somehow tracks down Emma to a foster home in Mankato, Minnesota. Before she can explain her reasons for needing her help, Emma's foster father discovers the girls talking and welcomes Lily to join them for dinner. During the meal, Lily lies when about how she and Emma met. Emma then excuses herself and Lily to the kitchen, where she sees a news report of her friend robbing a store. Although Emma wants her gone, Lily refuses to leave without regaining her crescent moon necklace from the abandoned house, which is the only thing she has from her birth mother. As Emma goes to get it, Lily steals a large amount of money from the foster parents and disappears. In the aftermath, Emma loses faith in her foster parents, who are disappointed with her lying, and runs away to the bus stop, where Lily finds her. Emma, blaming her for ruining her chance at a family, throws her the necklace and tells her to go away. However, Lily wishes to stay together with her, as she's tried to make good decisions in life that turn out bad, and being around Emma is the only time things are good. Emma coldly remarks she'd rather be alone and leaves. On a bus bound for Pittsburgh, Lily meets the Apprentice, who implies the darkness in her life is not her fault and something greater is influencing her. He then tells Lily about her birth mother as she listens closely. ("Lily")

In adulthood, Lily moves to Massachusetts and lives in a dismal apartment complex. At one point, she fakes her own death by getting into a car crash, which leads her landlord into believing she died. Lily then relocates to a trailer home and assumes the name Starla while working at the Coffee Mug Restaurant near a gas station. In time, she collects research about her connection with Emma since learning the truth from the Apprentice years ago, managing to make a wall collage of information. One day, while working at the diner, Lily serves Emma coffee as she pretends not to know her. When Emma later tries explaining that she caused Lily's life to turn out badly, the brunette shrugs it off, lying about having moved on from the past with a husband and daughter. She then walks off to a school bus and tricks a young girl into pretending to be her daughter after promising her free burgers for a week. After seeing Emma and Regina enter her house, Lily steals Emma's car, which has the Apprentice's scroll in it, with intentions of going to Storybrooke and getting revenge on Mary Margaret and David for what they did to her. Emma steals Lily's neighbor's car and blocks Lily on the road, trading punches with Lily, before aiming a gun at her. Lily eggs her on, believing she should be stopped before things spiral out of control, but Regina convinces Emma not to pull the trigger. After a heart to heart between Lily and Emma, the two are urged by Regina to pick up the pace since her leverage over Mr. Gold is compromised. The trio head to New York to rescue Robin Hood, where Regina attempts to convince Robin of Zelena's deception. Zelena eventually undos the glamour spell on herself, showing her true form, much to Lily's surprise, as she has never witnessed magic before. As Lily looks on, Robin admits to Regina that he cannot leave Zelena because she is pregnant with his child. ("Lily")

Arriving in Storybrooke, Lily is introduced to her mother, Maleficent, who is not the fearsome dragon she imagined her to be. After spending some time at the diner, she inquiries about getting revenge on Emma's parents, but Maleficent reasons they should let the past go and only think about being happy together in the future. Annoyed at her mother's softness, Lily decides to leave town and goes to the bus stop. There, her anger reaches a new high after Regina prods her about her darkness before stealing some of her blood to use as magic ink for the Author's quill. Seemingly pushed to the edge by this encounter, Lily's eyes give an eerie glow before she transforms into a dragon. After David, Mary Margaret, and Maleficent see her at the town line, Lily disappears into the woods as they follow her there. When Maleficent attempts to approach and calm her down, Lily begins spitting out a stream of fire, causing a worried Mary Margaret to rush forward. Using her tail, Lily knocks Mary Margaret into a rock, where she falls unconscious and bleeding. Taking off again, she flies to a meadow, reverting to human form. Maleficent finds her, gifting Lily the baby rattle she always kept in memory of her and then apologizes for not being the mother she expected. Lily admits being afraid that her own darkness will ruin her chances of having a future with Maleficent. Her mother, however, states she doesn't mind a little darkness and convinces her to stay in Storybrooke for a week before making a final decision. ("Mother")

When Isaac rewrites everyone's stories, Lily becomes one of the Queen Snow White's Black Knights and guards Emma's cell against outsiders. One day, Hook brings in a boy who he claims is a prisoner from the Queen. The boy, Henry, knocks her out, before he and Hook rescue Emma. As the trio sail away from the tower, Lily awakens, tearing off her headgear, and transforms into a dragon. Bursting out of the tower, which she reduces to rubble, Lily then charges after the ship. Offering herself as bait, Emma manipulates Lily into flying into her, before unleashing a well-aimed cannon blast that causes the dragon to crash into the ocean. At some point after this, Lily alerts the Queen about Emma's escape and brings Snow White directly to her at the docks. To keep Henry from being captured, Hook stays behind to fight Prince Charming. As Emma runs to Henry, Hook knocks over a food stall, burying Lily and some of the Black Knights under the rubble. ("Operation Mongoose Part 1", "Operation Mongoose Part 2")

After Henry reverts Isaac's stories and restores everything to normal, Lily attends a party at the diner, where she glumly sits at the counter. In conversation with Emma, Lily talks about her crescent moon necklace, which is a piece of the egg she hatched from and is her only clue about her father, whose identity not even her mother Maleficent knows. ("Operation Mongoose Part 2")

As Regina and Zelena are driving to Regina's coronation, Zelena informs her sister that Zorro is Lily's father. ("Leaving Storybrooke") 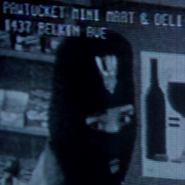 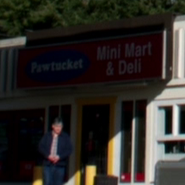 ...located next to the restaurant where Lily works 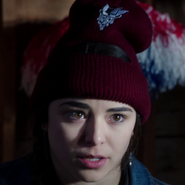 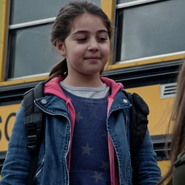 Retrieved from "https://onceuponatime.fandom.com/wiki/Lily_Page?oldid=955269"
Community content is available under CC-BY-SA unless otherwise noted.