"Is This Henry Mills?"

"Is This Henry Mills?"

"Is This Henry Mills?" is the twentieth episode of Season Seven of ABC's Once Upon a Time. It was written by Dana Horgan & Leah Fong, and directed by Ron Underwood. It is the one hundred and fifty-third episode of the series overall, and premiered on May 4, 2018.

Roni enlists Lucy's help to wake Henry and stop Gothel, but things don't go as planned. Meanwhile, Rogers and Weaver go to Margot in hopes of freeing Tilly before her magic can be used to power the spell. In a flashback, Young Henry struggles to decide what path to follow until a mysterious phone call helps put him on track.[2]

This section is a detailed recap of this episode. There are major spoilers. Click to expand.
In Storybrooke

In Storybrooke, Regina has Henry line up to a wall to measure how tall he's grown. As he leaves for school, Regina offers him her car. However, he isn't sure about colleges at this point. Later on, Regina surprises Henry with a bunch of brochures from universities for him to consider. Weeks later, Regina discovers that Henry was accepted to every university but Henry continues to have doubts about his future and isn't sure about what he wants.

On graduation day, as Henry goes upstairs to try on his cap and gown, he gets a surprise phone call from Regina's cellphone. When Henry answers it, it is adult Henry on the other end. The two, despite younger Henry not knowing who he is talking to, have a short conversation. Before ending the call, adult Henry tells young Henry where to find a graduation present that is behind the dresser. When Henry opens it, it reveals a magic bean, the same one that Henry uses when he leaves Storybrooke in "Hyperion Heights".

Later that night, Henry finally tells Regina that as he is ready to make a choice but will let her know the following morning. The final moments have Henry writing his family's story and narrating tale about him and his family.

A dark storm cloud is circulating around Seattle, and as Lucy tells Roni about how Dr. Samdi saved Henry from the curse but it failed to ignite True Love's Kiss between him and Jacinda, the two are startled by Eloise , who offers Roni a chance to join her Coven and save her family as she tells them that Henry has lost his powers in believing. Roni turns her down. Later on, Weaver makes amends with Regina by offering a special potion to help Roni save Henry. He tells Regina he's doing this because of Belle. But the potion she later gives Henry at his apartment doesn't work. Roni and Lucy decides to use another approach, by using the Once Upon a Time book, but that doesn't work either. At this point, Henry still doesn't believe and wants Regina and Lucy to stop this nonsense, after Lucy leaves upset Roni keeps trying to make Henry believe but when he asks where are the heroes in the book such as Snow, Charming, and Emma, Roni tells him that the curse Eloise created sent everyone back in time and that their past selves have yet to leave Storybrooke (thus revealing that the end of Storybrooke story and the Seattle are actually occurring alongside each other). After they return to Henry's apartment, and after Lucy tells him she has given up on him, Henry discovers Regina's adoption papers and sees the phone number, calls the number and speaks to his younger self, which triggers Henry's memories to come back. Lucy is excited that Henry's back and they go to rescue Roni.

At the Coven, Rogers witnessed one of the witches being transformed into a tree as the witches' causes Tilly to fall into a trance and escape. When he reaches the police station, Rogers confronts Weaver about Eloise and the witches, and Weaver tells him that everything he witnessed is true and that it will all make sense soon. The two then recruits Margot to help them. When they return, Margot attempts to talk Tilly out of it but Tilly used her magic to push her away. As the rest of the witches are turning to trees, Tilly shrinks Margot, Rogers, and Weaver down in size.

Earlier that day at Jacinda's, Lucy and Jacinda are packing for Bainbridge Island when Sabine gives Lucy a backpack that Drew used. When Lucy shows the two a tarot card and tell them about Samdi, the ladies decide to pay a visit to Samdi's office. When they do visit, Samdi is ready and show them a tied up Drew, then sticks a pin in a doll that causes Sabine pain and the women comply by joining him in the closet. The curse also wakes up Jacinda and Sabine afterwards, but Samdi escapes before they can stop him. Sabine and Drew are also reunited.

That night at the garden, Roni is ready to stop Eloise, but as Roni doesn't have magic Eloise gets the upper hand and succeeds. As Eloise prepares to destroy humanity, Henry and Lucy show up, and as Henry grabs Regina, he kisses her forehead and breaks the Curse, saving humanity. The curse not only restores everyone and their magic, but also gives Tilly a chance to choose love over evil, and use her magic to transform Eloise into a tree. The ending of the curse reunites Henry with Ella, Regina and Lucy, and Tilly with Hook and Margot.

With Weaver's powers restored, the former Mr. Gold attempts to retrieve his and Belle's travel book, but it is not in his safe. He then visits Samdi's office and finds the book there. When Samdi walks in, Weaver attempts to use his magic to choke Samdi but stops short of killing him. But then, Samdi is killed in front of Weaver... by Wish Rumpelstiltskin, who wants to become better acquainted with Weaver.

A scene where Henry and Regina tour the Ithaca University was deleted from the episode. There, Henry was supposed to meet another boy, played by Patrick Lubczyk, who played Kevin Hughes on an episode of Dead of Summer, another production by Adam Horowitz and Edward Kitsis.[3] In the script for the scene, Henry says to Regina that this place feels good and could be a good fit for him, whereas Regina is relieved that it's just a six-hour drive from Maine. Henry tells her not to get too excited, as he still wants to check out the USC. His mother eagerly steers him toward a group of kids who are Henry's age and says that they look nice and East Coast-y. Henry thinks that they're his tour group and asks his mom if she is going to be okay. Regina replies that she'll be fine, jokingly stating that there is a group session for empty nesters, with wine. At this, Henry rolls his eyes and says that he'll meet her at the hotel.[4] According to Leah Fong, one of the writers of the episode, Henry realizes that he can't tell the boy anything about growing up in Storybrooke, so he tells him that he is from Tallahassee.[5]

According to Adam Horowitz, the scene worked well on its own, but wasn't needed for the narrative of the episode and hindered the emotional impact of the episode because it played as a digression.[6] However, the scene can still be seen in promotional pictures.

7:30 PM
We've
been
traveling
for
some
time.
It's
been
[obscured] while since I've written. Before we left Paris, we got
[obscured] litter [sic] from home. I decided to keep it as a mem[image ends][38] 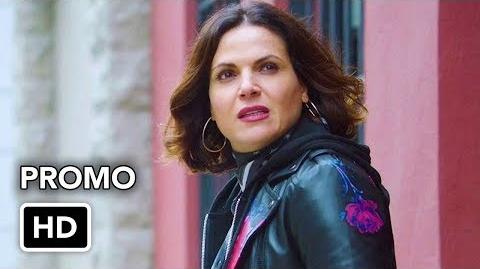