I've known Alice since she was a little girl. She always wanted a place to call home.

”
—The White Rabbit to Cyrus

"Home" is the eighth episode of ABC's Once Upon a Time in Wonderland. It was written by Edward Kitsis & Adam Horowitz and Zack Estrin and directed by Romeo Tirone. It premiered on December 12, 2013.

In flashback, we learn about Cyrus’ origin story while Alice seeks out the White Rabbit for answers involving his actions in Wonderland. Meanwhile, the Red Queen and Jafar’s disdain for one another comes to a head, followed by a series of chaotic events. The insurmountable consequence caused by their showdown will put everyone in danger and lead to a drastic change.[2]

In flashback, Alice and Cyrus sit by a warm campfire under a blanket of stars, waiting for them to fall. When the starfall begins, the stars float down like snowflakes. Alice and Cyrus kiss, but before things can get too heavy, she pulls out a compass she can feel in his pocket. She guesses it might be a gift from another girl, but he tells her it’s from his mother. For the first time, Alice learns that Cyrus hasn’t always been a genie. He believes his mother is dead because the magical compass always used to point to her, wherever she was in the world, but one day it stopped. Before Alice can ask anything else, armed men arrive, pulling Cyrus away. He stalls them while Alice grabs her sword and starts kicking butt. After they win, they realize she’s badly hurt as she collapses in Cyrus’s arms, blood flowing from a wide cut in her abdomen.

In the present, Alice watches from behind a tree as soldiers comb the forest. She knows they’re looking for Cyrus, and intends to find him first. Instead of using their heart powers to locate him, she’s going to meet him at their super-secret special meet up.

Dashing through the forest, Cyrus is captured by a sentient grapevine. As he struggles against it, his groans are transmitted along the grapevine to the Red Queen’s maze, where Tweedledee hears them. He rushes to report to the Queen, but sees his brother, Tweedledum, hurrying in the opposite direction. Tweedledee spies Tweedledum hand a bottle-sized package to Jafar. When Tweedledum asks if Jafar will protect him from the Queen, Jafar says only, “Soon, she will no longer matter. Thank you for your sacrifice.”

Tweedledee goes straight to the Queen and gives her the news from the grapevine. Reluctantly, he also tells her about his brother's betrayal. She is horrified and dismisses him immediately so she can check the drawer where she was hiding the bottle. It's empty and she is furious.

Alice and the Knave travel through the forest as she explains that her meeting place with Cyrus is far off in the Outlands. Before they get there, she needs to secure the White Rabbit's help. Even though he betrayed her, she needs him to make a hole to another world so they can escape as soon as they find Cyrus.

In the past, Cyrus carries Alice to the White Rabbit's house and pleads for help. Rabbit's wife, a brown rabbit, is a mystical healer. While she patches Alice up, the White Rabbit shushes Cyrus so he doesn't wake the baby bunnies.

The Red Queen drives a barouche style carriage to collect Cyrus from the grapevine. She cuts him down, still tied by the vine, and tells him they are going to fetch his bottle.

Jafar puts the bottle Tweedledum gave him in a case with two other bottles (one is round and jeweled, the other is an oil lamp like in Aladdin). He realizes that the new bottle doesn't match, and notices some paint peeling off. It's not the real bottle – he's been tricked!

Alice and the Knave approach the Rabbit's house. Some attempts have been made to make it look abandoned, but Alice barges in anyway. The entrance is a small door built into a hollowed out tree stump, but when she ducks inside, there's enough room for her to stand. The Rabbit, ashamed, immediately confesses his betrayal. Alice tells him she already knows and asks him to rejoin her and help her get home. The Rabbit explains that he can't help her because the Queen has his family hostage. Alice decides to get them back, but she doesn't know where to look. The Knave has an idea.

The Queen draws up to the broken down old wagon where she and Will used to live together. Inside, she passes the simple pink dress she wore in early flashbacks to get to where Cyrus's real bottle is hidden in a specially made case. He is not pleased to see it.

In the past, Cyrus paces outside the Rabbits’ house until the White Rabbit emerges to tell him Alice will live. Rabbit tells Cyrus that if he cares about Alice, he will leave her instead of making her live in constant danger by his side. Cyrus maintains that their nomadic lifestyle is what they've chosen, but Rabbit makes a convincing argument, saying that as long as he's known Alice, she's longed for a home where she could belong.

Furious, Jafar storms into the Red Queen's castle, but it's deserted. He finds a gift-wrapped box with his name on it. Inside, still alive, is the head of Tweedledum. He tells Jafar, “I think she’s onto us!” Storming into the throne room, Jafar takes a hair from the Queen's hairbrush. He flies away on his carpet, waving his hand behind him and casting a spell that blows up large sections of the palace.

Driving her buggy nearby, the Queen sees smoke rising from her castle. Cyrus smiles a little, saying, “Jafar’s on your side of the board, your majesty.” She retorts, “He may have destroyed a few pieces, but in the game of chess there’s only one queen, and she’s more important than them all put together.” She asks where Alice is. Cyrus laughs at the suggestion he might actually tell her, but the Queen warns him that either they or Jafar will find Alice soon.

In flashback, Cyrus visits the Caterpillar. He says, “I heard you can make people disappear – people who wish never to be found.” In exchange for the Caterpillar's magic, he offers the magic compass, which points to anything the holder has lost and is searching for.

The Knave brings Alice and the White Rabbit to the wagon where he lived with Anastasia. He guesses she might hide something valuable here, explaining with high symbolism, “If it looks this shabby on the outside, no one ever bothers looking at the inside.” He goes inside alone because the wagon is literally too small to hold more than one character at a time. Poking around, he finds the empty case where the bottle was stored and murmurs, “Always one step ahead…” He lifts a heavy drape and ducks down to see what's beneath. Outside, Rabbit is worrying that his family might be dead. The door to the wagon bursts open and the Rabbit family run out, meaning they were all cowering in there when the Queen stormed in to get the bottle. The Rabbits are dispatched to stay with family while the White Rabbit keeps his promise to help Alice.

Cyrus and the Queen ride to the Outlands. He explains that Alice will be there because that's where she thinks he will go. The Queen derisively comments on the faith they have in each other, and Cyrus says, “Well, if you can’t believe in love, what can you believe in?” The Queen snaps back and he looks at her hard as if seeing her for the first time. He asks, “You have a secret, don’t you?” When the Queen doesn't answer him, Cyrus murmurs, “Your wishes are very deep, aren’t they?”

Jafar does a complicated spell with the strand of the Queen's hair. It creates a storm in a goblet, which he releases out the window, directing it to find the Red Queen and kill her.

In the past, Alice and Cyrus are walking slowly because she's still recovering from her injuries. Cyrus reminds Alice of the terrible danger he's always in, and that she's in too as long as they are together. She protests, “Are you trying to run away from me?” He says, “What if that’s the only way I can keep you safe?” Alice replies, “Did you ever think – maybe I’m the one keeping you safe?” Once she asserts again that she's not afraid of the life they are living, Cyrus leads her into an invisible tent. It's equipped with furniture, a bathtub, and a wide bed, the floor strewn with soft Persian carpets. This will be their home. Alice realizes Cyrus must have given up something important for this magic, but he tells her he doesn't care.

Approaching the tent with Rabbit and the Knave, Alice confidently calls for Cyrus. She marches inside, but Cyrus isn't there. Her faith is finally shaken and she's losing hope. Then she sees Cyrus approaching on foot and rushes out to meet him. They call each other's names as she leaps into his arms and he spins her around. They kiss. The Red Queen interrupts rudely. She and Cyrus have made a bargain to work together, but Alice and the Knave don't trust her. Jafar's storm approaches fast but stops the Rabbit from digging his hole. She asks the Queen for a reason to trust her, asks why she's doing all this. The Queen says she wants the Knave back. She wants Jafar to change the past so she can go back to a time when Will loved her. He coldly tells her he will never love her again.

In his castle, Jafar sees the storm settle in one spot and realizes that must be where the Queen is. Presumably, he then goes off and has a beer or something, because he doesn't go to capture the genie, Alice, the Queen or the bottle.

After more arguing, the Queen is growing desperate as her confidence is shattered. Red-faced, she pleads for them to believe her before Jafar shows up. Alice reluctantly tells the Rabbit to dig his hole so they can all escape together. The storm Jafar sent throws a bolt of lightning at the Queen, but she deflects it. The lightning hits the Knave in the chest and he collapses. While the Queen rushes to his side, Alice collapses too. Her first wish was, “If the Knave dies, then I die,” and it's coming true. Cyrus begs Alice to use her last wish to save herself, but she refuses to make him a prisoner again. Alice tells Cyrus she loves him and passes out. The Knave is still conscious. He explains that the last wish was promised to him, and Cyrus agrees, warning him to be very careful what he wishes for. The Knave thinks a moment, then says, “I wish to end Alice’s suffering.” The Knave's wish comes true in the best possible way, and Alice is suddenly well again. Cyrus is not sucked back into the bottle because his curse was part of Alice's suffering. He's now free, but the Knave has disappeared. After a moment, Cyrus realizes what must have happened and starts searching for the bottle.

The bottle was knocked into a creek earlier and is floating swiftly away. Inside, the Knave wakes up and discovers bindings around his wrists, indicating he is now enslaved to the bottle. He mutters to himself, “Bloody hell.” 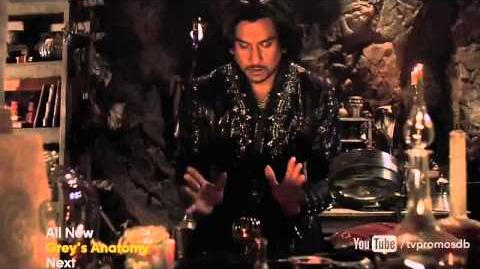