Gaston: Her Handsome Hero... Interesting. Wouldn't have picked you for a fan of cheap romance.
Belle: No! No. This is not like that. This book is about compassion and forgiveness... the things that truly make a hero.

"Her Handsome Hero" is the seventeenth episode of Season Five of ABC's Once Upon a Time. It was written by Jerome Schwartz, and directed by Romeo Tirone. It is the one hundred and fifth episode of the series overall, and premiered on April 10, 2016.

Belle turns to Rumplestiltskin with hope of finding a way to protect their child from Hades. However, they disagree over whether to use dark magic, as Belle forbids Rumplestiltskin from using his powers for evil. Meanwhile, Hades secretly meets with Gaston in the Underworld and encourages him to seek revenge on Rumplestiltskin. As the heroes try to find a way to defeat Hades, Emma has a terrifying nightmare that she realizes is beginning to come true. And in flashbacks, Belle and Gaston meet for the first time, but their blossoming romance comes to a halt on the eve of the Ogre wars.[2]

In the Enchanted Forest, Belle bursts into the stables asking her father why her riding lesson has been cancelled. Maurice tells her a suitor is visiting, Gaston. Belle has heard of him, and refuses to meet him, telling her father that Gaston is the vainest man in the world and she considers him a hunter of both animals and women. She turns to leave but her father stops her telling her there is a lot at stake. Ogres have began attacking the northern border. Gaston's father has a strong army, and if Belle were to marry Gaston, he would help them.

She rejects the idea, only Maurice then asks her to give Gaston a chance. Just then, Gaston walks in, and much to Belle's surprise he is sweet and understanding. He tells her he has heard much about her (all good things), but he also says that she obviously doesn't think very highly of him and he is okay with that, implying he heard everything. He turns to walk away when she stops him and says that "one walk couldn't hurt anyone."

Back in the Underworld, Emma wakes up from a nightmare where she was with Hook and Snow White trying to erase the names from the tombstones that Hades has created. Hook says he thinks something is wrong when a tornado appears. They seek shelter where Hook then says he senses a large creature nearby. Snow decides to fight the creature only to be taken. Emma then woke up. Emma tells Hook about the dream and wonders if they are visions of the future.

Regina spent the night in the library preparing a spell to break Hades' protection spell on the elevator by drawing runes all over the elevator door. Emma and Regina use their magic to open the door, which opens and reveals a brick wall instead of a way down to Hades' lair. Emma states that she believes she may be able to erase the names from the tombstone by using her magic.

Hades is waiting to see Zelena when he notices a daisy growing in the broken road and realizes the visitors have brough hope. Regina decides to talk to Zelena, who knows more about Hades rather than the others. When Regina visits Zelena, she realizes that she and Hades are in love. Zelena believes she may be Hades' only weakness.

Emma goes to the headstones to try cast the spell from her dream, only to suddenly realize that her nightmare was coming true when the same storm appears. She, Hook and Snow go to Regina's vault, where Hook, Snow, and even Regina tell Emma not to give up. Emma failed everyone but she saved Hook's life. Snow White tells Emma that love is worth it.

Meanwhile, Belle walks into Mr. Gold's shop, telling him she won't be separated from her unborn child and demands his help. He asks if this means that she accepts him as he is, she says she accepts that nobody fights for a child like a father. She does however, set down guidelines, such as no dark magic. He counters that dark and light magic are a matter of perspective. She tells him that if he wants any sort of future with her that he better do things her way.

Back in the Enchanted Forest, Belle and Gaston go for a walk. They find a young ogre trapped. Belle believes it will not hurt them and wants to let it go. Gaston agrees to leave it until they know it's okay to let it go. They return home and go to the library where they search for books.

Belle finds "An Alphabetic Inventory of Magical Antiquities", which lists all of the magical items in the kingdom. Belle reads about a mirror which reveals the evil in a person's soul. She hopes to use the mirror on the ogre to see if it means the kingdom any harm. Belle also shows Gaston her favorite book, "Her Handsome Hero", and she says the story defines how a hero is supposed to act; with compassion and forgiveness. They nearly kiss, until Belle turns him down. Belle leaves to fetch the mirror and Gaston agrees to watch over the ogre.

Moments after picking up the flower in the Underworld, Hades enlist Gaston, who was working at Storybrooke Pet Shelter. Hades wanted Gaston to take down everyone, starting with Gold to try and stop hope returning to the Underworld. He gives Gaston a set of lethal arrows, which were forged in the River of Lost Souls.

When Gold and Belle attempt to look up a spell to save their child, they end up leaving in an argument over his use of Dark Magic. They are met by an arrow fired by Gaston which misses them. Gold catches the next one, even as Belle tries to mediate. Gaston tells Belle that Gold was the one who killed him as he aims another arrow. However, Gold uses magic to take him and Belle to the docks.

Belle is shocked to learn about how Gaston died. Gold hopes to use Dark Magic to defeat Gaston. Belle refuses to allow him, believing that she's meant to help Gaston move on which would solve the conflict and weaken Hades. While looking through Gaston's locker, Belle finds the book "Her Handsome Hero" and figures out that she was Gaston's unfinished business. Belle then asked Gold to leave.

However, Belle is then surprised by Hades, who showed up to give her a deal: he will destroy the contract about her child if she allows either Gaston and Gold to through the other into the River of Lost Souls.

Gaston goes to the pawnshop, to find Gold only to be confronted by Belle. She believes he still has feelings for her, only to learn that the book was only a constant reminder of why he died. Belle tells him she is Gold's wife which upsets Gaston who leaves. Belle then finds Gold and asks him to promise not to hurt Gaston.

Back in the Enchanted Forest, Maurice reveals that the ogres are now advancing on their kingdom and believes Belle's actions are to blame. He says that they cannot win - they need the help of Gaston's kingdom so Belle will have to marry Gaston to get their help. Gaston arrives and proposes to Belle, and Belle reluctantly agrees, as she believes it is the only way to save the kingdom.

At the docks, Gold uses magic to choke Gaston by the throat and was ready to send him to the River of Lost Souls until Belle gets the dagger and commands him not to hurt Gaston. He drops Gaston on the ground. However, Gaston is unable to let his vendetta against Gold go, and when he goes for his arrow, Belle accidentally knocks Gaston into the River of Lost Souls.

Unfortunately, Belle discovers that because she saved Gold, the contract allowing Hades to take their baby was still in effect, as it had to be Gold to knock Gaston into the River of Lost Souls, not Belle. He then looks at a withering daisy flower that he picks up and is delighted that it means hope was fading away. The flower later shows up at Granny's Diner, as a gift to Zelena from Hades.

Emma, Regina, Hook, and Snow decide to return to the tombstone and see where Emma's dream leads. They chase down the beast in the woods that Emma believes to be the same one from the dream, and uses her magic to stop it. When they reach the creature, they are shocked to find a wolf, only to learn from Snow as she put Ruby's cloak on a big bad wolf; it's actually Ruby, who has shown up in the Underworld. She does not know whether she is still alive. Snow tells Emma that her dream was actually a vision pointing them to Ruby.

Simply place the glass over any text
and by saying the lines,
"Abracadabra.. Abracadabr.. A"


Mirror of Souls: If
someone has evil in their
souls, it will be revealed
in this mirror's gaze


Their eyes will glow
with demonic fire 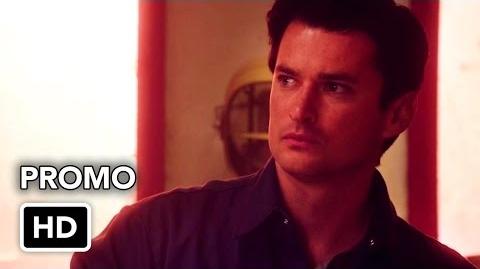 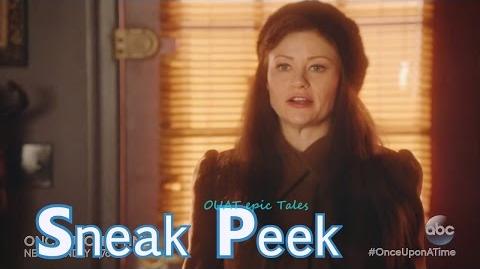 Belle Pushes Gaston - Once Upon A Time

Hades Confronts Belle - Once Upon A Time