All the dark deeds I've done... they've taken their toll. Poisoned my heart. Thickened the blood.

"Heart of Gold" is the seventeenth episode of Season Four of ABC's Once Upon a Time. It was written by Tze Chun & Scott Nimerfro, and directed by Billy Gierhart. It is the eighty-third episode of the series overall, and premiered on April 12, 2015.

Emma is still reeling after learning the truth of her parents' history with Maleficent, but she must focus on finding the Author, who is running loose in Storybrooke, before Gold does. When Gold's quest for his happy ending grows more urgent, he blackmails Regina into helping him. In a Fairy Tale Land flashback, Robin Hood learns what it means to be an honorable thief when he accepts a proposition by Rumplestiltskin to travel to Oz to steal a valuable magic elixir from the Wicked Witch.[2]

Regina wakes up and discovers Rumple is holding her hostage. He tells her if she wants Robin to stay safe she will do whatever he wants. She asks what happened to Robin, and he hands her a phone telling her to call him herself. Nine weeks ago, Regina says goodbye to Robin and sends them away. Arrving in New York, they are scared and someone steals Marian's purse. Robin steals a horse and rescues it from the thief. He tells Marian they have keys to Rumple's son's apartment. Marian mentions that he was also from the Enchanted Forest and survived there for many years so they can too. They are trying to adjust to life in the city when Rumplestitlskin opens the door to the apartment and asks what they are doing there. After verbally arguing about who really belongs there, Rumple clutches his chest and falls to the ground. At the hospital, Rumple tells Robin that all his dark deeds poisoned his heart. He was able to use magic to protect himself but without it in this land he will die. He tells Robin to retrieve some of the elixir of a wounded heart which he was sent to get in Oz in the past. Robin asks him "and why would I help you?" and Rumple tells him it's because he is an honorable person with a code to live by. Marian tries to convince Robin to let Rumple die but he tells her he cannot and that she is different than who he remembers. She reminds him everything is different now. Robin breaks into Walsh's furniture shop and steals the elixir; he gets away just as the police arrive. He brings it to Rumple and tells him they own the apartment now and he never wants to see him again. Rumple drinks it but says it isn't working. Marian comes in and tells him it's because it isn't real magic but rather a cold and flu medicine. Rumple asks her why she switched it as he caused her no harm.  "That's not exactly true," she says. She pulls out a necklace which glows green and reveals it is Zelena. Rumple asks how it is possible since he killed her. She explains that when he stabbed her in the jail cell her life force left her body before it shattered and she went through the portal with Emma and Hook. She killed Marian and assumed her form to come back and steal Regina's happy ending and that no one has been the wiser. She then taunts Rumple in reminding him that because she is still alive he never avenged his son's death. Rumple's heart fails and they resuscitate him. Zelena tells him she will give him the elixir if he finds the author, forces him to write her a happy ending and stops trying to kill her. He reluctantly agrees. Nine weeks later, in Storybrooke, Rumple finds the author, shows him a magic quill and convinces him to come with him. Regina calls Robin's phone and discovers Zelena is alive and acting as Robin's wife. Rumple tells her if she doesn't help him turn Emma dark he will call Zelena and tell her to kill Robin.

In the Sherwood Forest, Robin Hood owns and operates a tavern. Little John wants him to return to thieving with him but he explains that is no longer who he is after marrying Marian. The Sheriff of Nottingham enters and tells him his taxes are overdue. He says he will give Robin Hood two days or he will shut down the tavern and put Robin in jail. The Dark One enters later and tells Robin if he goes to Oz and steals the Elixir of a Wounded Heart, which can cure hearts physically and emotionally, he will take care of his tax problems. Robin enters through a door to Oz and meets Will Scarlet, who is tied up on the road. He releases him and Will tells Robin if he brings back some of the Elixir for him he will keep his mouth shut and not tell the guard. Robin Hood agrees and dresses as an Ozian guard. In the Emerald City, Robin is trying to find the elixir in the vault. He also finds a set of ornaments bearing a six-leaf clover and steals one, then puts some of the elixir in a vial and is finishing filling another vial when he hears a voice say "What are you doing?" He looks in the mirror and sees the Wicked Witch. He tries to hail her but she knows he is not a guard because he spoke to her, and they are not supposed to; Robin then spots a nearby bow with set of arrows and takes them, trying to take the Wicked Witch hostage, only to find that she's cast an illusionary spell and now there's three of them. She asks him why Rumplestiltskin sent him because she knows he is the only one bold enough to steal from her. She throws a fireball at him and he shoots an arrow towards a pillar and smoke hisses out. While she is coughing in the fog, he escapes. Back at the door, he lies and tells Will it was a trap and he got none of the elixir. Will explains he wanted it for him because his sister died and he wanted the hurt to go away. He tells Robin his wife will understand. Robin goes through the door and Will walks away. Will discovers Robin left the vile of the elixir in his pocket. The Sheriff comes to arrest Robin Hood but Robin's men prevent that from happening. Robin explains he understands being a thief with honor is to steal from those who have too much and give to those who have too little and he takes the Sheriff's bag of gold pieces.

Footage of this scene being filmed can be found in "Secrets of Storybrooke". According to Adam Horowitz, the scene is not canon:[3]

Robin Hood goes to Rumplestiltskin's castle after he returns from Oz. He sees Rumplestiltskin place a wand on a pedestal; the same wand that Robin steals in "Lacey". Robin remarks that Fairies can get quite nasty when they are stripped of their wands, but Rumplestiltskin says, "Only if they're still breathing after you've taken it"; implying that the wand that he stole from the Fairy Godmother in "The Price of Gold." Rumplestiltskin asks for the potion, but Robin says that the Wicked Witch proved too powerful, and he does not have it. Rumplestiltskin calls him foolish and says that no potion means no gold, which means no tavern, and debtors' prison. The Dark One tells him to get out of the castle and warns him that if he ever sees him there again, he will kill him.

*Only in archive footage.

Once Upon a Time

The Wizard of Oz 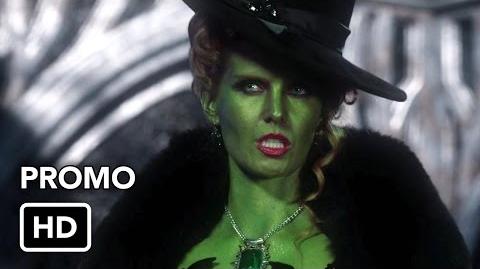 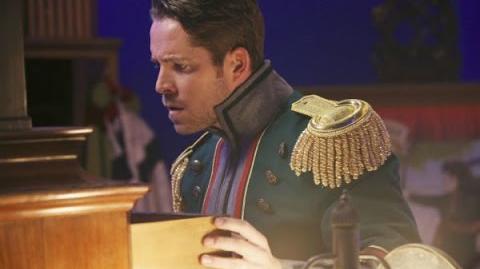 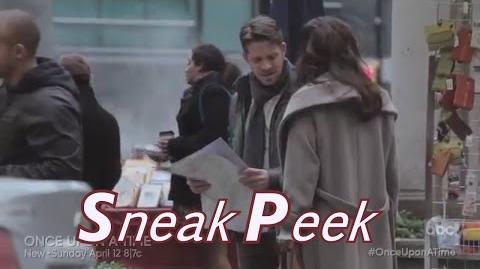