I would rather die than let you fill your heart with darkness.

Mary Margaret hires Mr. Gold as her attorney when Emma is forced to arrest her for the suspected murder of David's wife, Kathryn. Meanwhile, back in the fairytale land that was, Prince Charming sets out to stop a determined and unhinged Snow White, whose memory is still clouded by Rumplestiltskin's potion, from assassinating the Evil Queen.[2]

In Storybrooke, Sheriff Emma Swan takes mug shots of Mary Margaret Blanchard but insists that she does not want to be arresting her and that she has no choice, as the evidence is too strong. She tells Mary Margaret to be patient since Mayor Regina Mills will fire her if she does not do her job by the book and shows partiality. If Emma gives her a reason to fire her, the next sheriff will railroad Mary Margaret.

Snow White is cleaning inside the cottage she shares with the Seven Dwarves and singing. But seeing a bluebird, she tries to kill it with a broom. Grumpy enters, and Snow White explains that she is getting rid of the vermin in the house. He asks her to come to dinner, but she is shocked to find a talking cricket waiting to speak to her. Jiminy Cricket has arrived to stage an intervention concerning Snow White. Grumpy says that the potion is to blame for her changed behavior. Since taking it she has changed and has been angry with everyone. Jiminy points out that Snow White is taking her problems out on her friends. Snow seems to be agreeing but then argues that her real problem is the Evil Queen. Despite Jiminy's plea, Snow White says she will get revenge and leaves, declaring her intention to kill the Queen.

Emma takes Mary Margaret into the interrogation room for questioning. Regina is there as a third party person, so Emma does not show favoritism. Mary Margaret is surprised when being shown the box that the heart was in. She admits to having seen the box before, since it is her jewelry box, but insists it must have been stolen. Regina assures Mary Margaret that she knows what she is going through. She knows what losing someone is like and how it can put someone in a "dark place". Emma takes Regina outside and tells her that, as an observer, she shouldn't ask questions. Regina tells Emma to investigate the apartment for evidence of a robbery, but that a woman who has her heart broken is capable of doing unspeakable things.

Later, Emma checks her and Mary Margaret's apartment for signs of a break-in. Henry Mills shows up, even though he should be at school, saying that they need to help Mary Margaret. He believes Regina framed Mary Margaret, which Emma has trouble believing because his reason is only that she hates Snow White. She doesn't find that there was a break-in, but Emma hears rattling in the floor vent. When she opens it, Emma pulls out a hunting dagger that matches the kind of knife believed to have been used to kill Kathryn Nolan.

Back in the Enchanted Forest, Snow White is in the forest when she captures one of the Queen's knights. She threatens to kill him if he does not give her information about the Queen's whereabouts. After complying with her demand, Snow White knocks out the knight out and takes his armor and clothes as a disguise for herself. Grumpy shows up and warns her that her plan will not work. He offers to take her to Rumplestiltskin, as he wants him to reverse the effects of the potion. Snow White agrees to go, knowing that the wizard is capable of anything.

In Storybrooke, Henry broods in Granny's Diner when August Booth walks in and sits down next to him. Henry tells him that he is upset about Emma having to arrest Mary Margaret. August tells him that he also believes the book's stories are real and that it is his mission to convince Emma the stories are true, which excites Henry. He explains that his reason for being in Storybrooke is to help Emma believe in the stories. Henry says he has tried to find proof for Emma. August suggests he should search in the book, then leaves.

David Nolan pays a visit to Regina at her office and defends Mary Margaret. Regina says that evil is not born, but made, and is not always easily recognized. David is skeptical that Mary Margaret knows anything about evil. He tells Regina about his blackouts and his suspicions that he did these things, but Regina is dismissive of him. Emma tells Mary Margaret about the dagger and tells her to get a lawyer. With perfect timing, Mr. Gold walks in and offers Mary Margaret his legal services. She sends Emma away to speak with him privately. Mary Margaret says that she is unable to pay him, but he dismisses it, declaring that he is helping her because he is invested in her future.

In the Enchanted Forest, Prince Charming finds the nude knight who tells him about Snow White's plans to kill the Queen, and how she has gone off to find Rumplestiltskin. Prince Charming questions the knight's version of events but goes to find her. Rumplestiltskin tells Grumpy that the effects of the potion cannot be undone. Snow now is incapable of feeling love, and he does not have a true-love potion, as it is one that he has never been able to create. Snow White tells him that she did not come for love, and she asks for his help to kill the Queen. He gives her an enchanted bow and arrow that "always hits its mark" and shows her on a map where the best location to shoot the queen would be. Grumpy wants nothing to do with this. When Snow White inquires about payment, Rumplestiltskin says that he does not want anything and is simply invested in her future.

In Storybrooke, David visits Archie Hopper and tells him about his blackouts. Henry has taken the keys from his mother's office, he thinks that Regina used then to take the jewelry box and plant the dagger. Emma tries one of the keys in Mary Margaret's door, which successfully opens it, much to Emma's surprise.

In the Enchanted Forest, Prince Charming wakes up chained to a tree. He is surprised that the kiss did not restore Snow White's memories of him, but she still insists she does not love him. She goes off to kill the Queen despite Prince Charming's pleas. Jiminy finds Prince Charming and, after chewing through the ropes that bind him, suggests that since he cannot make Snow White remember him, maybe he should help her remember who she is. The Queen travels down the road indicated on the map, and Snow White draws back her bow, ready to fire. However, Prince Charming jumps in front of the arrow, which strikes him in the shoulder, and says that he loves her. He does not want Snow White's heart to be filled with darkness and that he would rather die than see that happen. Taken aback, Snow White kisses Prince Charming, and the effects of the potion vanish, with her memory of him restored. However, King George and his knights interrupt, and the guards take Prince Charming, knocking Snow White to the ground. As she sees him being taken away in a cage, Snow White vows to Prince Charming that she will find him.

In Storybrooke, David undergoes hypnosis in an attempt to remember what happened between him and Kathryn the night she disappeared. David talks about his last conversation with Kathryn and that she wanted David to be with Mary Margaret if that meant that he would be happy. He has flashbacks of being in the woods with Snow White in the Enchanted Forest, he mistakes these for memories of Mary Margaret. He remembers Snow White trying to kill the Evil Queen and himself saying to her, "Don't kill her!" David rushes out of Archie's office, without telling what he saw. He goes to Mary Margaret, telling her about the flashbacks he just saw. He asks her to tell him the truth as to whether or not she killed Kathryn. David's lack of faith in her pains Mary Margaret. She stood by him when the phone records said he lied, and when he was found at the spot of the disappearance, irrational with no memory, and she orders him to leave.

In the Enchanted Forest, Snow White returns to the dwarves and apologizes. Grumpy realizes that she has returned to her normal self, much to everyone's relief. She tells them that King George took Prince Charming, and the dwarves offer to come with her to help. Rumplestiltskin collects a hair strand from Prince Charming's cloak and drops it into a bottle containing Snow White's hair. The two strands of hair react to each other. He places the bottle above in his reserved place for "True Love" on his shelf of potions.

In Storybrooke, while Mary Margaret is making her cot, she discovers a key as it falls out from underneath the bed. The skull-emblazoned key is able to unlock the door to her cell. She quickly relocks the door, when Emma walks in to give her breakfast and bad news. She confirms that the DNA from the heart is a match for Kathryn; therefore, the case against Mary Margaret is going through. Emma admits that she thinks Regina is behind it. Later, she visits Mr. Gold's pawn shop to discuss the possibility that Regina framed Mary Margaret. Mr. Gold acknowledges that Regina is tough, but he believes Emma is more powerful than she knows. The final shot shows Mary Margaret's cell standing empty.

This scene is included on Once Upon a Time: The Complete First Season.

Emma Swan is sitting at a table in Granny's Diner when August Booth comes and sits down. He says he'd like to ask her out again but knows it isn't the best time for her and she agrees with him. He still offers to buy her a drink and Ruby goes to get it for her. He notices that she can't stop looking at Regina Mills and asks what she plans on doing. Emma wants to give her a piece of her mind but it hasn't been working out lately. August gives her the advice to don't let Regina see her coming. August gets up and leaves the money to pay for Emma's drink. 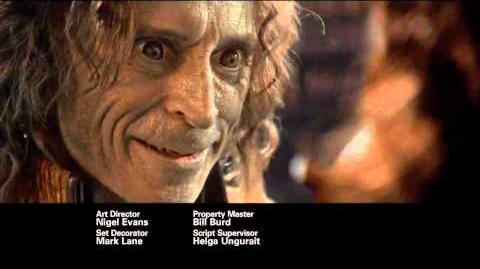 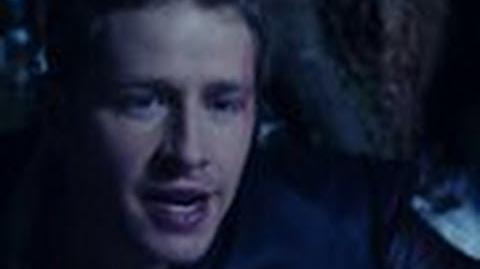 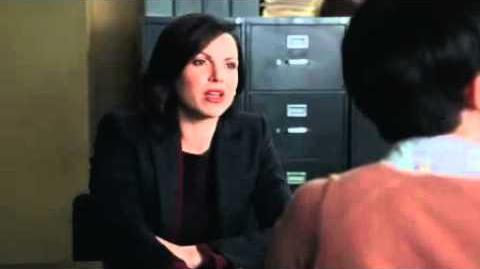 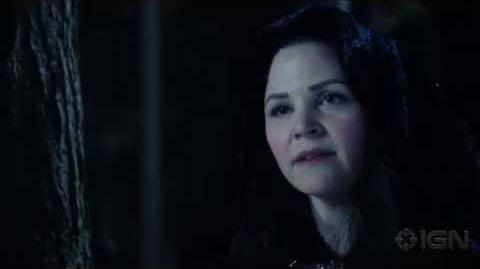