”
—Alice and Will Scarlet src

The Grendel's House is a Wonderland location featured on ABC's Once Upon a Time in Wonderland. It appears in the third episode of the spin-off.

In the Whispering Woods, Grendel lives in a house with his doting wife. After her death, he is heartbroken, but upon hearing of a magical rope called the forget me knot in the Red Queen's possession, he steals it from her, earning him a physical disfigurement from her for his theft. Grendel relives his happier days with his wife by placing the forget me knot in their old home and becomes entranced by the item's power in allowing him to see his wife alive again. ("Forget Me Not")

Alice and Will Scarlet agree to retrieve the forget me knot from Grendel so the Caterpillar will forgive the debts Knave owes him. Approaching the Whispering Woods, they fall into a pit hole outside Grendel's house and awaken bound up in a kitchen. They are horrified when they realize that Grendel intends to butcher and eat them. With the forget me knot hanging from the ceiling, Grendel watches as images, of when he was handsome, young and happily married, peek out. From this, Will gathers that was Grendel's old life and attempts to convince him the only way to move on from the past is to let go of it, but he is not interested. When Grendel goes outside to chop up some wood, the duo escapes from their constraints and open the front door just as Grendel comes back, but an angry Bandersnatch awaits them outside. The beast breaks open the house and send Grendel sprawling back into a wall. He is knocked down again by the creature when Alice manages to entrap the Bandersnatch around the forget me knot, to which Knave bursts in to kill it with a knife. Out of gratitude for saving his life, Grendel gives them the forget me knot.

After Alice and Knave leave for another destination, Grendel calmly sits in a chair as Jafar and the Red Queen walk into his home. They question if he killed the Bandersnatch, and Grendel denies it, but when asked who slew the Bandersnatch, but simply says there were guests in his house. Seeing as they are getting nowhere for answers, Jafar and the Red Queen entice him with the possibility they can revive his dead wife. He then confesses a young woman and man killed the Bandersnatch. Perplexed, Jafar asks who the man is. Grendel states the woman called him Knave, to which a hint of recognition flashes in the Red Queen's eyes. After Jafar thanks him for his honesty and assistance, Grendel asks to be reunited with his wife. Unfortunately, Grendel has no inkling of their trickery and after he gives them the information they wanted, Jafar kills him by stabbing him with his staff. ("Forget Me Not") 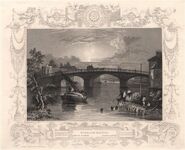 Retrieved from "https://onceuponatime.fandom.com/wiki/Grendel%27s_House?oldid=893447"
Community content is available under CC-BY-SA unless otherwise noted.