The wealth dried up like a raisin in the sun and the people suffered without a strong ruler. And that's why you've come to me, is it not? To find that strong ruler, that prince who can save you and your kingdom.

"Greenbacks" is the fifth episode of Season Seven of ABC's Once Upon a Time. It was written by Christopher Hollier & Adam Karp, and directed by Geofrey Hildrew. It is the one hundred and thirty-eighth episode of the series overall, and premiered on November 3, 2017.

Tiana seeks help from a traveling soothsayer, the iconic Dr. Facilier, in an attempt to save her kingdom. But when it's revealed that he has an ulterior motive she's forced to take matters into her own hands. In Hyperion Heights, Sabine and Jacinda take on a risky business venture, but the strength of their friendship is tested when Victoria interferes with their plans. Meanwhile, Ivy recruits Henry to investigate Victoria, and Roni makes a discovery that could change her relationship with Henry forever. Rogers uncovers a crucial clue in his search for Eloise Gardener.[2]


Victoria visits the woman she has imprisoned and offers to make amends over tea, because she needs help destroying Lucy's belief. The woman gives her some advice, but also refuses the offer of tea, demanding her "special brew" instead. Victoria refuses.

At the office, Sabine shows up to give Lucy some treats. Then Victoria arrives and hands a shopping list to Ivy. Victoria tells Sabine that she is raising her rent.

In the past, Tiana's mother welcomes guests to an auction at their home, selling off all of the belongings at their estate. Drizella appears long enough to make mocking comments about Tiana's father dying, which drives Tiana to tell her mother she can't stand all their things being sold. Her mother wishes Tiana could find a prince, and Tiana says she has an idea.

At the bar in the present, Rogers drops off a box of minimal evidence about his missing girl case, but he takes a sketchbook that belonged to the girl with him. After he leaves, Roni confronts Henry about his drink with Ivy in the last episode. Henry thinks Ivy might be willing to help them, but Roni cautions him against trusting her.

Sabine goes to see Jacinda at work with an idea for them to make money with beignets she makes. The only drawback is Sabine used all their rent money to get the ingredients.

At the police station, a man is accosting an officer when Rogers shows up to save the day by punching him. He notices the man has a tattoo on his wrist that matches a drawing in the missing girl's sketchbook.

At Mr. Cluck's, Sabine talks Jacinda into letting her run her beignet operation out of Louie's kitchen.

In the past, Tiana goes to a village to see a soothsayer, who tells her fortune, advising her to follow the red crow to find the prince she seeks.

Ivy comes into the office with Victoria's requested ingredients. Ivy asks where she is going with them, and Victoria threatens to replace her as assistant. Ivy then watches Victoria on the security camera as she opens a secret panel in the elevator to come to the hidden floor. Ivy calls Henry offering dirt.

Henry shows up at the bar telling Roni about Ivy's lead. Roni warns him again and encourages him to date Jacinda. When Henry goes to the bathroom, she responds to and then deletes a text from Ivy on his phone.

At Mr. Cluck's, Sabine's business is going well with lots of customers appearing. Lucy comes in excited and wants to stamp all the paper pastry bags with a firefly image, referencing a story Sabine told her about wishing on fireflies.

In the past, Tiana thinks the soothsayer was a charlatan because there is no such thing as a red crow. But she follows three black crows to a tavern called The Crimson Crow, where a man tries to rob her and another man named Marius defends her and asks for a conversation.

In the present at the office, Victoria tries a beignet, then calls someone named Ralph and tells him to wreck the beignet business.

At the police station, Rogers questions the arrested man about his tattoo, who claims to know nothing about the missing girl, but does say that the symbol is a powerful rune and he would hate to meet whatever was threatening the person who drew it.

At Mr. Cluck's a fire starts in the kitchen and Sabine and Jacinda are unable to put it out, so they run away.

In the past, Tiana and Marius talk at her castle. As they pleasantly depart for the evening, Tiana realizes he has stolen her father's firefly ruby awarded him in the war. She stops him and he admits to being a commoner coerced by the soothsayer, Dr Facilier, who has turned his love into a frog, but will give her back if he gets the ruby. She sends him away. Later, on the balcony, Tiana mourns the reality of poverty she was unaware of. Her mother tells her that it was a mistake to send her looking for a prince, and that she needs to embrace that her father's legacy lives on in her.

In present day, a fire truck is parked outside of Mr. Cluck's and firefighters go through the scorched building. Sabine tells Jacinda this was only a setback, but Jacinda tells her she isn't buying in to any more of her schemes. Sabine gives her all the money she earned that day, which is enough for two months rent - time to find a new job and a new roommate.

Roni shows up at the Belfry office to question Ivy's motives. Ivy says she will prove she is trying to destroy her mother, by taking Roni to see whatever Victoria is hiding. When they get to the secret room, Victoria's prisoner is no longer there, but there are the remains of tea for two. Ivy says this was a waste of time, but Roni finds a piece of paper with something significant on it.

At Jacinda's apartment, Sabine is packing to leave for her mother's. Lucy tries to stop her, unsuccessfully.

In the past, Tiana shows up at Dr. Facilier's, to exchange the firefly ruby for the woman he kidnapped, who is currently in frog form in a cage. He takes the ruby, which will help free him from a curse, but refuses to give her the frog. She threatens him with a sword, and his pricks a voodoo doll which causes her pain. She knocks over the table the doll is on and takes the frog while he scrambles for the doll. Once again held at sword point, this time he magically disappears.

In the present, Sabine is leaving, but Jacinda stops her and apologizes for what she said before. She has bought a truck for them to sell beignets out of.

In the past, Tiana finds Marius near a lake. She asks him to help her fight the changes in the kingdom, but he admits to having misled her. He kisses his love, and turns into a frog himself. The two of them hop into the water.

At the police station, Sabine brings Rogers some beignets as a thank you for his help in acquiring the food truck from an impound lot. Outside of the police station, the man with the rune tattoo watches them and makes a call, saying that someone is looking for "the girl."

At the Belfry office, Ivy comes in and asks if she can do anything for Victoria. Victoria tells her she is embarrassed by her.

Ivy goes up to the secret room, where she encounters the imprisoned woman. Their conversation reveals that they are working together to trick both Roni and Victoria, and the woman is on Ivy's side - but Ivy says not to call her that, her name is Drizella. 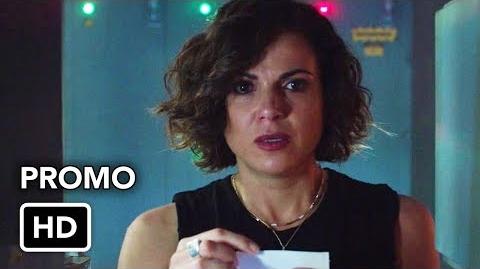 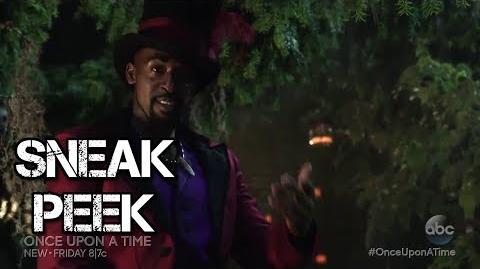 Retrieved from "https://onceuponatime.fandom.com/wiki/Greenbacks?oldid=942798"
Community content is available under CC-BY-SA unless otherwise noted.