You let your desires override the fates. Now, it will be your fate to serve the desires of others.

"Dirty Little Secrets" is the tenth episode of ABC's Once Upon a Time in Wonderland. It was written by Adam Nussdorf and Rina Mimoun and directed by Alex Zakrzewski. It premiered on March 13, 2014.

In flashback, Cyrus’ actions lead to a fateful day that leaves his mother near death, resulting in a decision that comes with a binding price he and his brothers have to pay. Meanwhile, after banding together, Alice, Cyrus, The Knave of Hearts and the Red Queen split up into two groups that leaves the Knave and the Red Queen face to face with the fearful Jabberwocky, and Cyrus’ guilt about his past tests his relationship with Alice.[2]

In old Agrabah, Cyrus and his two older brothers play a card game with a group of tough looking men. The eldest brother warns Cyrus that he's pushing his luck and should quit, but he perseveres and wins the game. His opponents accuse him of cheating and a fight nearly breaks out. Cyrus gloats while the losers are removed from the bar. Drunkenly celebrating later on the walk home, Cyrus admits to the naïve middle brother that his winning was due to some cheating. The eldest brother warns, “One day your luck will run out, Cyrus. You’ll have to learn to play the hand you’re dealt.”

They see the men from the bar riding away from their home, and flames suddenly burst through the windows. Exclaiming that their mother is inside, the three brothers rush into the fire.

In the present, Cyrus, Alice, Will and Anastasia have retreated to the invisible home to discuss their options. Cyrus is very distressed about having been so close to his brothers and not knowing it. He thinks that if he can break the curse and free all three genies, Jafar will not be able to do his spell. To do this, he must return to the Well of Wonders, whose Guardian cursed them all. Anastasia exposits that each land has magical waters running beneath, and gives him a map to Wonderland's Well. As a back up plan, she wants to recruit her army to help defeat Jafar, apparently no longer believing that the four of them will be able to do it alone. They decide to split up instead of leaving Anastasia and Will safe in the invisible shelter.

In the village where Lizard and Will partied the previous night, most of the residents are passed out in the streets. They don't hear the sounds of chickens clucking or the general barnyard din, and they don't notice when the animals all fall suddenly silent at the arrival of the Jabberwocky. She wakes a snoring man to ask about the genie. She reads the terrified man's fears in his mind, asking, “Would you rather talk about your two children? They are being bathed by their mother in the river as we speak. ‘How quickly can she get there?’ You're wondering, ‘How will she kill them? Will she have mercy on the baby?’ The answers are: very fast, very slow, and no – I don't care much for babies.” The man is only able to direct her to Lizard’s house before he dies of fright.

The Jabberwocky finds Lizard’s slim body collapsed on the floor, still covered in jewels. She decides not to waste her trip, and pulls a knife from her boot.

At the Red Queen’s palace, the Jabberwocky presents Jafar with Lizard’s eyeballs that she cut out earlier. He uses a spell to recreate the last thing the eyes saw before they closed, and Anastasia’s face appears. He orders the Jabberwocky to bring him the Queen.

In old Agrabah, Cyrus and his brothers watch in despair as a healer does what she can for their badly burned mother, whose face is covered in bandages. Cyrus tells his brothers of the legends of the Well of Wonders and his plan to use the water to heal their mother. They all set out together to retrieve the water.

In Wonderland, Cyrus is unusually taciturn as he and Alice travel to the Well. She tries to draw him out with questions about his brothers and how they were cursed in the first place, but he only responds by growing more tense and evasive, claiming they were just in the wrong place at the wrong time. Alice knows something is upsetting with him.

Will and Anastasia knock on the White Rabbit’s door. He’s horrified to see the Queen on his stoop, but she asks for his forgiveness for taking his wife, his children and his honor. She wants his help to become the Queen everyone deserves. Her plan is to have the Rabbit go out and tell everyone they can trust her now. Asked for his endorsement, Will says, “She wants to change. Whether or not she’s capable of it, only time will tell.” The Rabbit informs them that Jafar has released the Jabberwocky and offers again to get them out of Wonderland. Anastasia declines and convinces him to muster the people.

Anastasia rushes through the forest with Will. She knows it's not safe to be out in the open if the Jabberwocky is loose, but Alice and Cyrus have to be warned. The ordinary bird noises of the woods suddenly stop. Using the best judgment she's actually capable of, Anastasia uses her Mistress powers to order Will back into his bottle, then hides it behind a stump. She calls out to the Jabberwocky to reveal herself. Behind her, the Jabberwocky slinks over to the stump, then silently approaches, whispering a greeting in Anastasia's ear. Despite having warned Will not to be afraid because the Jabberwocky feeds off of fear, Anastasia is already trembling and clumsy in her terror. She tries to use her magic to defend herself, turning a branch on the ground into a sword. She impales the Jabberwocky with it, but only the sword Jafar has can actually harm the monster. Anastasia is knocked unconscious, and the Jabberwocky collects the genie's bottle from its hiding place.

Alice and Cyrus find the path ends at two identical red doors, seemingly free-standing in the middle of the forest. They cannot walk around the doors, but must choose one to go through. A white knight standing guard informs them that one door leads to the Well of Wonders, and the other door will ‘drag them under.’ Cyrus has no patience for riddles, venting that he was hoping for some control over his life once he was freed from the bottle. Alice is sympathetic, but tells him, “Sometimes you just have to play the hand you’ve been dealt.”

In another Agrabah flashback, Cyrus is kneeling at the Well of Wonders to fill a bottle with its magical waters. His brothers follow suit, but a terrifying woman rises from the water. Her skin is bloated and white, her limp, black hair hiding nearly all but her bright eyes. She wears wet rags, and resembles a Japanese water ghost. She is Nyx, guardian of the Well of Wonders. Nyx warns the brothers that the water cannot heal their mother because she was always destined to die this way. After demanding they return the water, she disappears back into the depths of the well. While his older brothers are ready to pour out the contents of their bottles, Cyrus convinces them to steal the water and save their mother.

Alice tries to get the knight to give them a hint about which door to take. She realizes that he will only speak to answer ‘yes’ or ‘no’ questions, and he always answers with a lie. Having solved the riddle, she chooses the correct door to reach the Well, but Cyrus insists on going through alone, eventually snapping at Alice when she protests.

Anastasia wakes in the deepest part of her own dungeon. Will sits impassively, tied to the chair opposite her. Jafar stands over them, gloating briefly before Anastasia reminds him that he cannot take possession of the genie until she uses her three wishes. Because he can't kill her or Will, she feels he has nothing to threaten her with, but he introduces the Jabberwocky to make her use the wishes. Even Will is horrified by this development.

Slowly approaching the Well of Wonders, Cyrus summons Nyx. He asks her to have mercy on his brothers and to put an end to the genie curse.

In the past, Cyrus and his brothers arrive at their mother's side just in time to save her. She requires all the water they stole before she is healed. Unwrapping her bandaged face, she reveals herself as Amara, the same sorceress who taught Jafar to search for the genies’ bottles.

In Wonderland, Cyrus pleads his case to the Guardian of the Well, finally falling to his knees and begging for his brothers’ sakes. She tells him she will only lift the curse when the water he stole is returned. He confesses that he gave it to his mother, who is now long dead. Nyx tells him his mother is still alive, and repeats her condition that he return the water to lift the curse. She disappears without telling him how to find his mother.

The last time his family is all together, they are celebrating Amara's miraculous recovery from the burns. When she hears how her sons saved her with stolen magic, Amara tries to rush them away into hiding, but it's too late. Nyx rises from a puddle of spilled water. Though Amara begs for mercy, Nyx curses the brothers, “You let your desires override the fates. Now it will be your fate to serve the desires of others.” In turn, each is enveloped in red smoke and carried into bottles on their mother's table. She screams as all three bottles disappear.

The Jabberwocky jabbers at Anastasia for a while. Jafar has put a spell on the Queen to make her mute so she can't wish for freedom or protection (as she tried for a moment to wish Will out of Wonderland). Reading Anastasia's deepest fears, the Jabberwocky reveals that the Queen was once one of Cinderella's ugly step-sisters. She knows Anastasia is afraid that she is unlovable, terrified that she will never know love again. If she is doing to Anastasia with this fear what she did to Jafar with his fear of drowning, it's understandable that Anastasia quickly breaks. On the Jabberwocky's commands, she wishes first for her crown, then for her jewels. She uses her third wish to make the Jabberwocky stop. Will is instantly transported back into his bottle.

Later, deprived once again of crown and jewels, Anastasia quivers in a prison cell, her mind nearly broken. She is recalled to herself by the appearance of Tweedledee, who has been hiding out in the tunnels under the castle since Jafar's ascension. He, still loyal to her even now, offers her some food. He wants to break her out, but she tells him not to bother and orders him to warn Alice and Cyrus about the Jabberwocky and Jafar's appropriation of the third bottle. She wants him to tell them to flee Wonderland forever.

After his failure to convince the Nyx, Alice approaches Cyrus. He realizes she was eavesdropping the whole time he was arguing with the Guardian. He's deeply ashamed of the mistakes that resulted in him and his brothers being cursed. To comfort him, Alice confesses that she was sent to an asylum and agreed to a procedure that would have made her forget him. They embrace and resolve to find his mother.

Jafar addresses his gloating to Amara, trapped as his staff. Nearby, the Jabberwocky is unimpressed, so he begins the spell to make himself all-powerful. 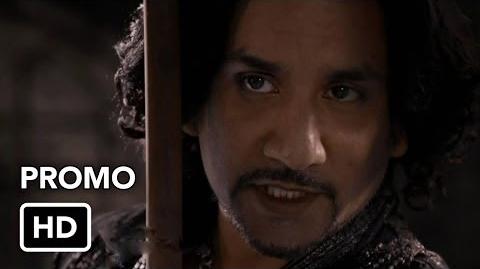