"Child of the Moon"

I know how to recognize a Child of the Moon.

"Child of the Moon" is the seventh episode of Season Two of ABC's Once Upon a Time. It was directed by Ian Goldberg & Andrew Chambliss and directed by Anthony Hemingway. It is the twenty-ninth episode of the series overall, and premiered on November 11, 2012.

Ruby's fear about turning into a wolf during the first curse-free Storybrooke full moon is confirmed when one of the town's residents is viciously murdered, and Ruby is the prime suspect; Albert Spencer threatens to expose David Nolan as a shepherd, not a prince, and not fit to run the town as sheriff; and Leroy stumbles upon some treasure in the Storybrooke mine that could help bring Mary Margaret and Emma back into our world. Meanwhile, in the fairytale land that was, Red Riding Hood finds a kindred spirit in Anita, a charismatic and mysterious leader of a pack of humans who, like Red, turn out to be wolves.[1]

The counterparts of the Seven Dwarves are busy in the mines when suddenly Grumpy crashes through a wall and discovers the diamonds; the kind that can be refined into fairy dust. David Nolan is elated that they may finally have the magical power needed to get Jefferson’s portal hat working again and rescue Emma Swan and Mary Margaret Blanchard. But the celebration is disrupted when Albert Spencer appears. He's still holding a grudge against David, who was Prince Charming, for defying him in the Enchanted Forest, and he means to do something about it. He swears that soon the town will see David is not fit to lead anyone.

The town is celebrating at Granny's Diner. Billy approaches Ruby and reveals to her who he was in the Enchanted Forest. He tells her that he was a mouse named Gus who lived in Cinderella's pantry.Billy asks to spend time with her, but seeing that she doesn't want to, Belle comes and tells Billy that they already planned a girl's night out. When asked why Ruby would not want to go out with him that night, Ruby replies it is complicated. Meanwhile, Ruby and Granny are preparing for the first night of wolfstime since the curse was broken. Ruby's magical cloak is missing and it has been 28 years since she last shape shifted, and she is not sure that she can control her wolf form anymore. To be safe, they seal her up in the freezer at Granny's. But the next morning, she is gone. David and Granny find her asleep in the woods outside of town. When Ruby awakens, she has no memory of her night as the wolf. Worse, when the three of them search for a missing Billy, they find his abandoned tow truck, at the docks, and his mutilated body, torn apart in a dumpster. Ruby is sure that she, as the wolf, was the killer, but David refuses to doubt his friend the way he once doubted Mary Margaret. Ruby insists on being locked away at the Sheriff's Station, not as much for her safety as for everyone else's, but David says that he will find the real killer. Albert Spencer arrives and accuses David of protecting Ruby out of friendship, and says that he will use this to show the town that he is not fit to be sheriff.

In a flashback to the Enchanted Forest, Red Riding Hood and Snow White have struck off on their own, not long after Red discovered that Granny had been lying to her, and she was actually a werewolf, which resulted in Peter's death. They have been running away from the Evil Queen's men, one of whom ripped Red's hood. Snow White says that she trusts Red, but they agree to split up, because Red doesn't know if the torn hood will prevent her transformation. They agree to meet up again the next day. In the morning, Red wakes in the forest. The hood worked, but suddenly the hood is grabbed by a young man, who explains that he is a werewolf like her and can tell her how to control it. Red goes with him back to a secret lair hidden in the forest. There, he introduces himself as Quinn and a woman in the lair as Anita, her mother. Granny had told Red that her parents were dead, but Anita is very much alive and the pack leader for a whole gang of werewolves. She explains that Granny kidnapped Red, because she saw the wolf as a monster to be ashamed of. Anita teaches Red to accept the wolf and thus control it. The lessons take some time, but soon Red can remember everything from her time as the wolf and can control her actions.

Snow White tracks Red to the werewolf lair. Anita and Quinn are suspicious of her at first, but when Red explains that she's found a new home, Snow White understands and prepares to leave. Before she can, several of the Queen's soldiers burst in, hunting for Snow White. They manage to kill Quinn, before the werewolves and Snow White can stop them. Anita blames Quinn's death on Snow White and has her bound so that Red can kill her and the wolves can eat her that night. Red won't stand by and watch her friend be devoured, so mother and daughter fight as wolves. The battle ends with Anita accidentally being impaled and Snow White unties herself and quickly places the red cloak on Red changing her back into her human form. The other werewolves disperse as Red and Snow White bury Anita. The two women leave together, still friends.

In Storybrooke, Spencer incites a mob to storm the police station and seize Ruby. They burst into the Sheriff's Station, but Ruby is already gone. David and Granny have brought her to Belle, who has agreed to hide her in the library. Belle insists on staying and tries to put shackles on Ruby, but Ruby chains Belle up instead. Ruby says that the town is in danger, and, besides, she deserves to pay for her crimes. When the moon rises, the wolf takes over and the mob hunts her. Meanwhile, David and Granny track down a suspicious car and discover blood in the trunk along with a hatchet and Ruby's cloak. The car is Spencer's. This whole thing has been his revenge plot against David. David and Granny manage to reach the wolf, just before Spencer can shoot it. David goes in, braving the frightened wolf's wrath, and helps Ruby regain control of herself as the wolf. He then lays her cloak over her, changing her back to human form. When a scream goes up from the crowd, they find Spencer gone. David and Ruby track him to a nearby beach, where they find him standing beside a fire. He admits to killing Billy, who he says was only a mouse. Before David can stop him, Spencer throws the remains of Jefferson's hat into the flames, destroying his last chance to save his wife and daughter.

Later, Regina Mills, Mr. Gold and Henry Mills are in Mary Margaret's loft. Regina called Mr. Gold, because Henry woke up from one of his nightmares, trapped in a burning room, to find his hand burned. Mr. Gold gives Henry a magical necklace that will help him control his nightmares and explains that he is being transported to a dimension between worlds, a side effect left by the sleeping potion. Using this control, he calms the flames in his dream and sees Aurora.

In the present-day Enchanted Forest, Aurora awakens from a restless sleep to tell Emma and Mary Margaret that the boy in her dream is Henry, Emma's son. 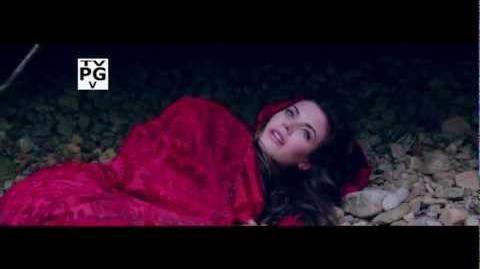 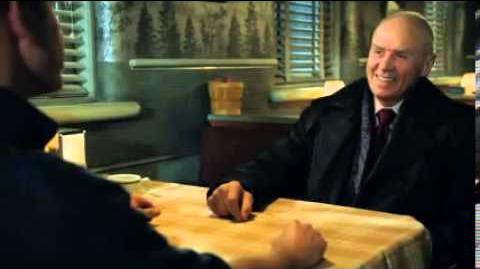 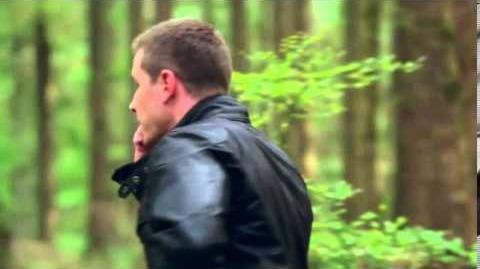 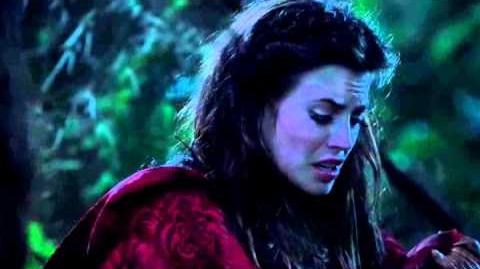 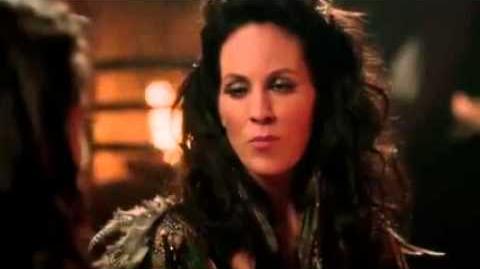 Retrieved from "https://onceuponatime.fandom.com/wiki/Child_of_the_Moon?oldid=905103"
Community content is available under CC-BY-SA unless otherwise noted.