"Ariel" is the sixth episode of Season Three of ABC's Once Upon a Time. It was written by Edward Kitsis & Adam Horowitz and directed by Ciaran Donnelly. It is the fiftieth episode of the series overall, and premiered on November 3, 2013.

Back in the Fairy Tale Land that was, when Ariel saves Snow White from drowning in the ocean's depths, Snow returns the favor by helping her new friend get acquainted with Prince Eric, with whom she has fallen madly in love with. Meanwhile, Emma, Mary Margaret, David and Hook attempt to save Neal, who is imprisoned in one of Pan's encampments, and Regina and Mr. Gold begrudgingly team up to find a way to take down Pan.[2]

While on the run from the Evil Queen's guards, Snow White is chased to a cliff. The guards draw their swords and plan to capture her. But, in desperation, Snow White jumps to the depths below. Unconscious, she starts to sink, when a little white hand grabs her, and swims for the surface. Regaining consciousness, Snow White looks upon her rescuer, and thanks her. When Snow White looks to her feet, she sees a green fishtail instead. Startled, at first, the mermaid reveals her name, Ariel.

Back in at their camp Neverland, Regina is trying to teach Emma how to utilize her magic to start a fire, while her parents look on with unblinking eyes. Emma comments on how difficult it is to focus when Regina is commanding in her ear. Telling her that when the times comes it'll be much harder to concentrate when the wind is blowing in her face, or rain, or trying to dodge arrows, "Yes, concentration's hard, that's the point," she comments. Regina tells her to harness her anger, and use it to control the magic within. Emma succeeds, only after losing her temper a bit, and calling Regina a monster. Hook then comes to David and Mary Margaret and discloses what Peter Pan last told him—Neal is alive! Both men agree telling Emma would only upset her, but Mary Margaret can't stand lying, or even intentionally leaving out details to her own daughter.

Back in the Enchanted Forest, Ariel and Snow White are beached, and talking. Snow White reveals she jumped off the cliff to get away from her murderous stepmother. Ariel reveals, she too, is on the run—but not from someone, but to someone. About a year ago, Ariel saved a prince from drowning. She doubt if he even knows she exists, but she feels love at first sight for him. Snow White is only too happy to help out her new friend, especially with true love. Ariel tells Snow White how, because of her hobby of collecting human keepsakes, she knows there's a ball that very night, honoring the goddess of the sea, and Ariel wants to meet Eric there. Snow brings up the only flaw in the plan: Ariel can't set foot on land with fins. Struck with an idea, Ariel stands, and through some kind of magic, her tail turns into a pair of legs. Shakily, she walks over to sit on a rock beside Snow White. Ariel explains that, according to legend, every year, at the highest tide, the goddess of the sea grants merpeople the ability to walk on dry land until the next high tide, which in twelve hours.

Snow White asks why she cannot simply ask for more time—apparently no one has physically seen Ursula in over a thousand years, and is thought of to be a myth. Snow White declares she's happy to help her rescuer find love. Ariel asks Snow White not to tell Eric that she's a mermaid, at least not until he (hopefully) falls in love with her in return, which Snow White does agree to.

Mary Margaret proves unable to keep a secret from Emma by immediately blurting out that Neal may be alive, leaving Emma dumbfounded.

Using the powers he took from the Seer all those years ago, Mr. Gold is attempting to see the near-future, when he appears, revealing that no one can see the future in Neverland, for it is a place where time stands still. Pan attempts to sweet-talk Rumplestiltskin by offering him cooked eggs in a basket; his favorite breakfast. But, Mr. Gold will have none of it. In a verbal joust, it is made known that Peter Pan cannot die without Mr. Gold dying as well. Pan tells Mr. Gold that even if he did save them—which Pan knows he will not—his son will never forgive him—for Rumplestiltskin still hasn't forgiven his own father for abandoning him. Pan offers him a way out of Neverland, to leave, by himself and go home to Belle, and start life anew with a new family.

Having been informed, Regina refuses to be distracted from Operation Henry any longer, and breaks from the group. Everyone else follows a nearby trail that shows signs of a struggle that could lead to Neal.

At the ball, fetchingly draped, Ariel and Eric's eyes meet in a crowded room, and they share a dance. Eric recognizes her face from a vision from his shipwreck. He believes Ursula saved him, and in doing so, sent him a vision of his future—Ariel. The young lovers find they both want to see the world, and as it so happens, Eric is to set sail the very next morning to sail away on an adventure. He asks Ariel to come along, but realizes he's pressuring her, and offers her time to think- if she meets him by the next morning, they will be together; should she decline, he admits he will understand.

Meanwhile, Queen Regina has been watching from her Magic Mirror, and is enraged that Snow White is alive. As punishment for not killing Snow White, Regina kills one of the guards that believed her dead earlier, by magically cracking his neck. Frustrated with her guards, Regina decides to take matters into her own hands, and is suddenly struck with inspiration.

As what's left of the group continues down the trail, Peter Pan spies on them, with a few of the Lost Boys plan to move a sleeping Neal to the Echo Caves, stating "the game is about to get interesting."

The apparition of Belle appears before Mr. Gold once again, and beckons him to leave Neverland, to start a new family, and finally find Rumplestiltskin's happy ending. Just when he's about to give in to his desires, Regina appears, not believing the illusion for a second. She chokes "Belle" into submission until the true form is revealed—the shadow of Peter Pan.

Emma reveals to her mother that she kissed Hook. Mary Margaret is surprised, but insists that Neal will be understanding. She is aware Emma is afraid to believe Neal is actually alive, but doing so will give her a chance of a happy ending.

Back at the ball, Ariel regrets leaving the sea, and feels terrible that she's making Eric chose between her, a girl he's just met, and his dreams of happiness. Snow White, seeing that she's thinking of him first, realizes it's true love, and comforts her, telling her to be honest with him. Ariel decides to use her remaining three hours to think. She heads toward the beach and asks for help from the sea goddess. Then the tides turn, and Regina, in the form of Ursula, arises from the waves.

Regina berates Mr. Gold for his moment of weakness. Angrily, she demands the help of Rumplestiltskin, once again. Mr. Gold hesitates because he knows the only way to kill Pan and save Henry is to sacrifice his life. Regina had never faced Peter Pan, Rumplestiltskin has. Regina tries to find another way, and they realize there is a fate worse than death. But, to succeed they need a particular object back in the pawnshop. As crossing realms is an impossible feat at the present time, they need the help of someone...

Regina, in the form of Ursula, offers Ariel a deal; she gives her a bracelet that will allow her to keep her legs forever, and be a part of his world. Ariel accepts the deal. She puts the bracelet on Snow White, and an exchange occurs; while Ariel gets to keep her legs, Snow White gets becomes a mermaid. Believing she is acting on her friend's best interests, Ariel explains giving Snow White a tail will allow her to escape the Queen by living under the sea. That's when Regina appears to them, in her true form, delighted that Snow White can no longer run away.

Emma, Hook, Mary Margaret and David finally arrive at the end of the trail, the Echo Caves. Hook reveals that the caves gain their power from the saying, "The deeper the lie, the more truth in its echo," meaning that in order to get to Neal, they'd each have to reveal their deepest, darkest secrets to each other. Pan sees the secrets as weaknesses he can use against the inhabitants of Neverland, and that those secrets will eventually be the undoing of the interlopers.

Dawn arises on the scales of Snow White's new found tail. She tries to remove the bracelet, but it's enchanted so that the wearer cannot remove it, only Ariel can, but Regina stands in the way. Snow White demands that Ariel leave her with Regina, so as to be with Eric, and Ariel does leave, apologizing. Having finally detained her victim, Regina uses her magic to try and crush Snow White's throat, but Ariel quickly sneaks an attack on Regina by stabbing her in the neck with a mini-trident (otherwise known as a fork). She throws the bracelet off the dock, immediately regaining her mermaid form, and tells Snow White to hold her breath as they jump into the water, and swim away, leaving Regina as livid as ever.

The group decides they have no choice and enter the cave. In it, Neal is trapped in a cage, on a stone pillar on the other side of a bottomless pit. As the group reveals their secrets to each other, a path appears in front of Neal, and toward them with each truth:

At this point, the path has been completed, Emma crosses safely, but she can't open the cage and free Neal without revealing a secret of her own.

It works, and Neal is set free, while everyone in the group is forced to live with their new-found truths about each other.

Ariel manages to carry Snow White off to a shore, and Snow White pushes Ariel to leave and find Eric. Ariel happily goes to her true love. He's been waiting as long as he could until she shows up, which she does. Ariel calls out to Eric, but no sound escapes her mouth. Regina reveals she's taken Ariel's voice from her, for the only thing worse than telling your true love how you feel and facing the possibility of rejection is never telling him at all, never getting the chance to be happy, never knowing at all. Heartbroken, Ariel swims away, and Regina returns to her castle. In her magic mirror, the actual goddess, Ursula appears, and threatens Regina to never impersonate her again, or suffer unspeakable consequences.

Mr. Gold and Regina appear on the shores of the giant squid's lair. But this time, instead of blowing into the conch shell and summoning the kraken, Regina whispers to the sea through it, and summons a still mute Ariel. Mermaids have the ability to travel across realms, and they plan on using that ability. For incentive, Regina gives Ariel her voice back, returns the bracelet to her with the promise of legs, and the promise of seeing Eric again. All she has to do is go on a little journey to Storybrooke.

At the Royal Castle.
Commencing at
seven of the clock 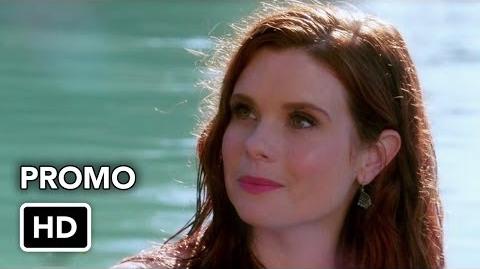 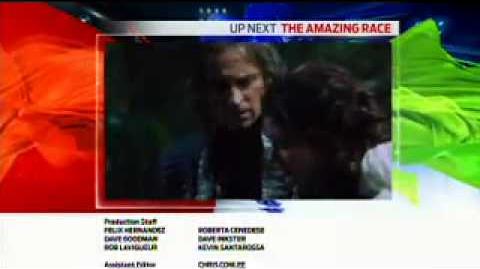 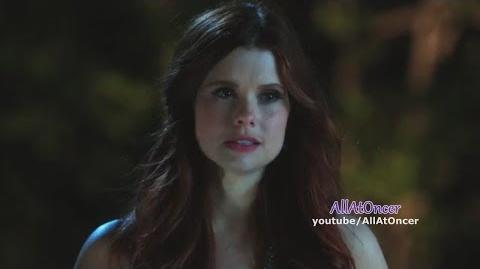 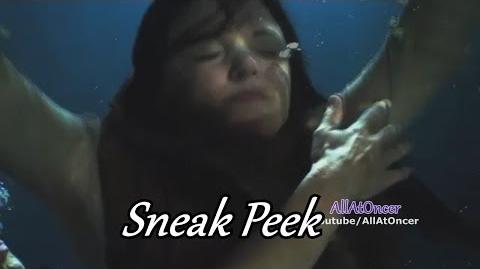