"To Catch a Thief"

Cyrus and Alice, you two are now one. May you live happily ever after.

"And They Lived..." is the thirteenth episode and series finale of ABC's Once Upon a Time in Wonderland. It was written by Adam Horowitz, Edward Kitsis and Zack Estrin and directed by Kari Skogland. It premiered on April 3, 2014.

The all-powerful Jafar succeeds in making his father love him and forcing Anastasia into thinking she loves him. After Alice, Amara and Cyrus escape, Jafar imprisons the Jabberwocky and calls upon an army of dead soldiers to do his bidding. Meanwhile, Alice and the White Rabbit raise their own army to fight Jafar for the realm and a final confrontation between Alice and Jafar takes place at the Well of Wonders.[2] 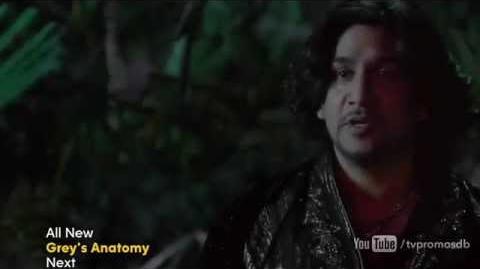 Retrieved from "https://onceuponatime.fandom.com/wiki/And_They_Lived...?oldid=942853"
Community content is available under CC-BY-SA unless otherwise noted.