Aladdin: Are we done searching yet?
Jasmine: You can ask the same question a hundred times and you will get the same answer. We search until we find Agrabah.

"A Wondrous Place" is the fifteenth episode of Season Six of ABC's Once Upon a Time. It was written by Jane Espenson & Jerome Schwartz, and directed by Steve Pearlman. It is the one hundred and twenty-sixth episode of the series overall, and premiered on April 2, 2017.

When Hook finds himself trapped in another realm along with the Nautilus and her crew, he races to return to Emma before Gideon can execute the rest of his plan. In Storybrooke, Regina and Snow take Emma out to get her mind off Hook’s disappearance. And in a flashback to Agrabah, Jasmine befriends Ariel, and together they set out to locate Prince Eric as the threat from Jafar intensifies.[2]

"Many years ago" in Agrabah, the Sultan, looks for suitors for his daughter. Jafar answers the request, except he has an ultimatum: if Jasmine rejects his hand in marriage, sunset will destroy Agrabah. Later on, while chasing down a thief, Jasmine runs into Ariel, who is looking for Prince Eric. Believing that finding Eric will bring his army to protect Agrabah from Jafar, Jasmine and Ariel team up and track down Eric on Jasmine's magic carpet, only to discover that Prince Eric was Jafar in disguise. Ariel suggests that Jasmine use a vial of powder she stole from Jafar to defeat him. Jafar uses his magic to send Ariel and the vial back to the sea.

Before sunset, Jasmine agreed to marry Jafar, in exchange for sparing the lives of her people. She hands him the ring. Jafar reveals that he never wanted to rule Agrabah since its people had always scorned him. He wanted the ring, which contained the magic jewel that powered Agrabah's protection spell. He then uses it to cast a curse to make Agrabah disappear, "out of human reach".

As the Nautilus submerges, Nemo and Liam inform Hook that Gideon took the Kraken blood needed to return to Storybrooke. Hook suggests that they hunt down the squid.

On land, Jasmine and Aladdin search for Agrabah. Jasmine finds a ring in her pocket after she had wished to find Agrabah. They later continue the journey on the boat, when they come across the Kraken, and Hook saves them. It turns out that the Nautilus compass can lead them to a person whose heart is filled with revenge. This gives Hook an idea to help track down Jafar, who might still have the ability to help him return to Storybrooke. Unfortunately, the Kraken critically damaged the Nautilus. Jasmine uses her second wish to send them to Jafar's pinpointed location, Hangman Island.

After they part ways with Nemo and Liam, Hook, Aladdin, and Jasmine encounter Ariel, who had a lamp that contains Jafar, who is now a genie. When Jasmine summons Jafar, it only ends up freeing him, since he found a way to break his genie curse while imprisoned, before going on to knock out the others with magic. Jafar no longer wants anything from Jasmine, the only vengeance on those responsible for his imprisonment (Cyrus and Alice). Jafar goes on to mock each of them, calling Aladdin "battle-broken" and "weeping". At Jasmine's insistence, he tells her what happened to her kingdom, but only because the answer amused him - Agrabah was trapped inside the ring that she just wished up. Jafar then mocks Jasmine's past failure and inability to save her people, before demanding that Jasmine give him the ring. Jasmine turns Jafar into a walking staff using the magic powder, much to Jafar's shock. With true love's kiss, Jasmine breaks Aladdin's genie curse. This causes Agrabah to re-materialize from the ring. Later, Ariel gives Hook a seashell that can allow him to call Emma across realms. Hook reaches Emma, vowing that he never meant to leave her and that he'll find a way to return to her.

In the present day, Emma tells David about Hook having killed Robert. David is upset over this and about Hook's reluctance to confess himself. Emma tells David that he left on the Nautilus after they broke up over this issue, as Leroy saw earlier. Later, Regina suggests to Snow and Emma that they enjoy ladies' night at a new bar called "Aesop's Tables," but a heartbroken Emma passes. At home, Emma accepts that Hook won't come back and gathers his things with Henry when she gets a phone call about a bar fight. As she arrives, Emma discovers that Regina and Snow tricked her into joining them. Regina encourages Emma to open up about her heartbreak while a drunk Snow challenges a group of Vikings to a knife-throwing contest. Aesop, the bar's owner, meets a crying Emma. Aesop tells Emma about a heartbreaking of an artist and his wife, then gives her a napkin to wipe her tears away. At home, Emma makes to put away Hook's belongings, when she noticed a seashell calling out her name, discovering that it was Hook telling her that he'll return to her. After Emma loses the signal, she hears Aesop's voice and she looks up, only to discover that Aesop was Gideon, who needed Emma's tears to blackmail her. With her tears, Gideon can prevent Hook from using any portals to return to Storybrooke, unless she helps him kill the Black Fairy. 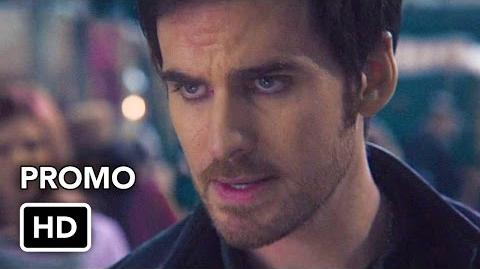 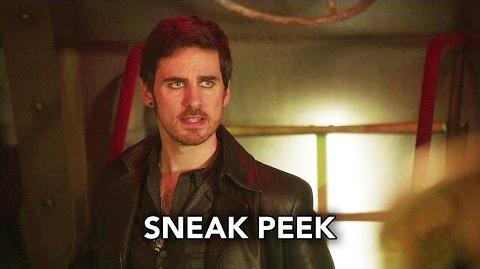 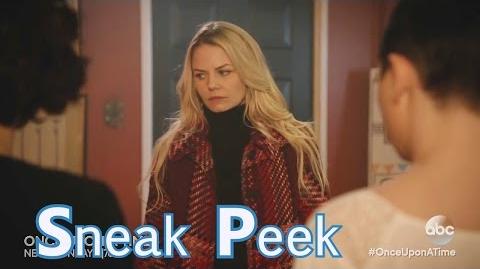